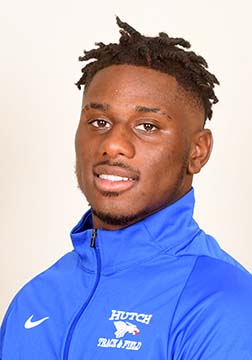 Picture of Clyedterrious Thompson from when he was at Hutchinson Community College.

Clyedterrious Thompson had a solid debut for Southern University of Baton Rouge on Friday at the LSU Purple Tiger Meet at Carl Maddox Field House Indoor Meet.
Thompson, who graduated from Bogalusa High School in 2020 and was at Hutchinson Community College the last two years, was part of a 4×400 relay team victory, he took fourth in the long jump and sixth in the 60 meters.
The 4×400 team ran the event in 3:21, winning by almost two seconds over Hinds Community College.
Besides Thompson, the team had Jordan Thompson, Nicholas Scott and DeAnthony Nervis.
Clyedterrious Thompson came in fourth place for the long jump with a distance of 23 feet, 6.25 inches. LSU’s Brandon Hicklin won at 24-11.
Clyedterrious Thompson was seventh in the 60 prelims and then came in sixth for the finals. His prelim time was 6.89 seconds before he ran a 6.97 in the finals.
LSU’s Da’Marcus Fleming topped the prelims at 6.71 and then won in the finals at 6.73.
Southern’s next meet will be on Jan. 20-21 at the Samford Invite in Birmingham, Ala.