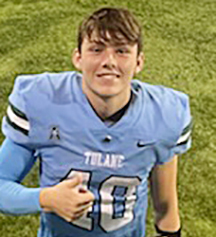 Tulane capped off the 2022-23 season by coming in the top 10 of the final AP Top 25 for college football.
The Green Wave came in ninth in the poll with a 12-2 record.
Tulane captured the American Athletic Conference with a 7-1 mark and won the league’s title with a 45-28 victory over the University of Central Florida.
The Green Wave was then victorious in the Cotton Bowl with a 46-45 victory over the University of Southern California despite being down 45-30 late in the game.
Bogalusa resident and 2022 Pope John Paul II graduate George Arata plays for Tulane. This year, Arata, who is a freshman, carried the ball three times for 12 yards.