Pine went 3-1, while Bogalusa was defeated in their four games at the Hannan Hustle Girls Basketball Tournament that was held Dec. 21-23 at Archbishop Hannan.
Pine was defeated in its first game that was held on Dec. 21 by St. Thomas Aquinas, 45-35.
Dillon Sumrall scored 13 points to lead Pine.
Alyssa Phelps posted 11.
Pine rebounded by winning its next three.
The first was a 47-23 win over De La Salle on Dec. 22.
Phelps tallied 13 to top Pine.
Sumrall posted 12.
Addyson Phelps recorded 11.
Pine then won two games on the final day of the event.
The first was a 50-38 win over Bogalusa.
Addyson Phelps scored 18 points to lead Pine.
Alyssa Phelps and Samantha Thomas both posted 10.
Ladericka Payne was Bogalusa’s leader in points with 13.
Tamerical Peters posted 11.
Tamiya Crumedy recorded seven.
Pine’s next game was a 50-41 victory over Kenner Discovery.
Alyssa Phelps put up 26 in the win.
Thomas scored 12 points.
Addyson Phelps tallied 10.
Bogalusa’s first game was a 46-30 loss to Lakeshore.
Peters topped the Lady Jacks with 10 points.
Payne and Willasia Pam both posted six.
The next day was a 58-33 loss to Mandeville.
Peters was Bogalusa’s leader in points with 19 points.
Payne posted 10.
Mandeville won the tournament.
Bogalusa was defeated in a pair of games on the final day.
The first was a 50-38 loss to Pine.
The next game was a 52-47 setback to Archbishop Hannan.
Peters scored 26 points to lead Bogalusa.
Payne tallied 10.
Pine and Bogalusa both had one all-tournament player.
Alyssa Phelps is on the all-tournament team for Pine.
Peters made the all-tournament team for Bogalusa. 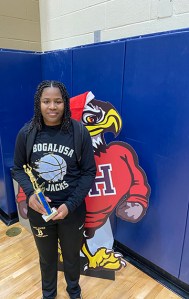 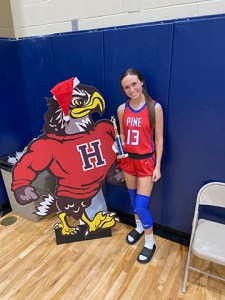