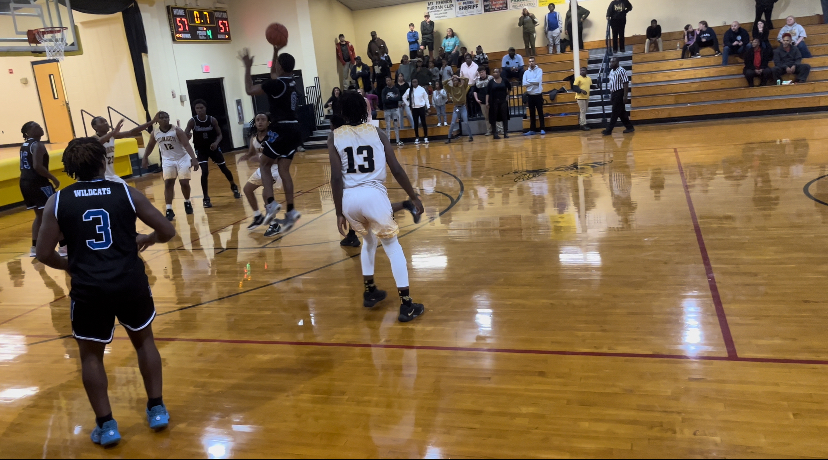 Jamari Lewis hits the game winner at the buzzer in last Wednesday’s game against Mt. Hermon School in the 2022 Mt. Hermon Tournament.

Varnado went 1-1 and Mt. Hermon lost its three games in the 2022 Mt. Hermon Tournament that took place from Nov. 16-18.
Varnado started the event with a 59-57 win over Mt. Hermon School on last Wednesday.
Jamari Lewis capped off a strong game by hitting the game-winning shot at the buzzer.
Lewis barely missed a double-double, going for 26 points and eight assists to go with four rebounds and two steals.
Tyriq Bell recorded 13 points and a steal.
Devonte Magee posted eight points and two steals.
Quovadis Bickham tallied six points, three rebounds and three steals.
Tillias Hall put up four points and grabbed eight rebounds.
“In order to be successful as a team, we must be able to finish games even in the most tough situations,” Varnado coach Mace Copeland said. “Mt. Hermon is a great basketball team, so we knew that we had to make big plays and control the tempo of the game in order to beat them . Jamari Lewis is the true definition of a point guard and a leader. He understands how important it is to play unselfishly and get his teammates involved. When the game is on the line he is definitely a clutch player.”
Omira Williams scored a game-high 31 points for Mt. Hermon School.
Tyalvin Tate posted 15.
Daeshaun James and Laterrio Harris both tallied six.
Varnado’s next game was a 51-13 loss to Central Private on Thursday.
That was Varnado’s final game of the tournament.
Hall led the team with five points and eight rebounds.
Bell posted three points and two steals.
Magee had three points and one steal.
Chase Brooks tallied two points and four rebounds.
“I realized from the moment that I was named the head coach that things needed to change and change fast. The main thing I needed to do the most was build the discipline. When you come in as a new coach and change the culture some people will love the change and some will resent it. We have to become more disciplined on and off the court as a team,” Copeland said on Friday. “I am responsible for the direction the basketball program heads in. Having a new coach, new offensive and defensive system is a tough adjustment for a team when they were used to something different and were expecting the same results. Taking responsibility is the biggest struggle we have as a team. We must become a more disciplined ball club and display a winning mindset. My job as the head coach is to the lead and teach. This loss to Central Private has definitely humbled them, especially coming off a game winner against Mt. Hermon the night prior. I am here to build positive character values. In moving forward, I am a strong believer in you get what you put in. We struggled tonight offensively and defensively. The team will fix the mistakes and get better. We are preparing to play Geo Next Generation in Baton Rouge, La. on November 21 at 6 p.m. I tell my players all the time that a jersey doesn’t make a player, the player makes the jersey.”
Besides the game against Varnado, Mt. Hermon was defeated by Kentwood and Central Private.
The game against Kentwood was 57-39 on Thursday.
Tate posted 15 to top Mt. Hermon.
Harris scored 12 points.
Williams had eight.
James tallied four.
The contest against Central Private, which was on Thursday, was 54-28.
Tate led Mt. Hermon with 15 points.
Williams posted five.
Harris tallied four.
James and Keenan Jackson both recorded two.
Varnado’s next game will be on Nov. 29 against Plaquemine on the road, while Mt. Hermon School is back in action on Dec. 6 against False River in a road game.