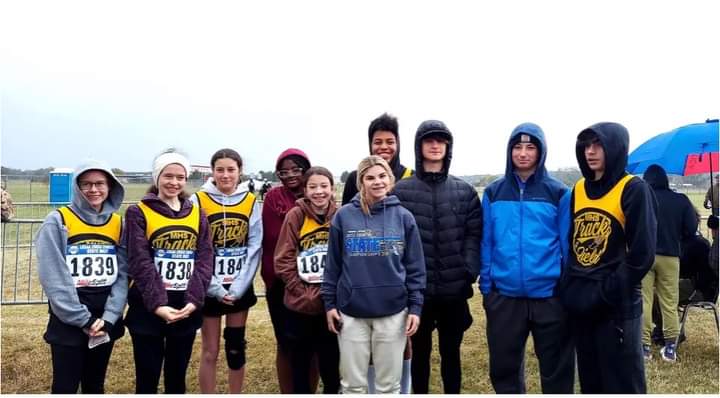 Mt. Hermon School’s cross country teams competed in the state meet as the group capped off its inaugural season at Northwestern State University in Natchitoches.
“Considering this was the inaugural year, they qualified for state and six of them qualified by being in the top 25, I feel blessed to have worked with this group of kids and feel excited about the future for cross country at Mt. Hermon,” Mt. Hermon coach Lynn Lewis said. “I can’t wait for next season.”
In the boys, Graycen Fortenberry was Mt. Hermon’s top runner. He came in 39th place out of 145 competitors. Fortenberry ran the race in 20 minutes, 6 seconds.
Graycen Claunch was 70th with a time of 21:33.
Carson Constant was 130th at 26:57, while Phoenix Bertrand and Christopher Mason Taylor were 132nd and 133rd with times of 27:20 and 27:23.
Highland Baptist Christian School’s Tyler Blissett won the race in 16:29.
Westminster Christian Academy of Opelousas’ Owen Melancon ran a 16:50 for second, followed by Simpson’s Ean Allain’s 17:04 and Christ Episcoal School teammates Mason Lyons and Hugh Penton rounded out the top five with times of 17:43 and 17:51.
Christ Episcopal School won its second straight state title.
This year, they scored 64 points, winning a close competition over Westminster Christian Academy of Opelousas, which posted 72, as 23 teams posted points.
Ascension Catholic was third with 111, followed by Simpson’s 159 and Hackberry rounded out the top five with 208.
Mt. Hermon School was 21st with 488.
In the girls, Katherine Quin was Mt. Hermon’s top finisher after coming 55th with a time of 25:57.
McKenzie Fountain was 78th at 28:22.
Raeleigh Martin came in 90th with a time of 30:01, while Paisley Pena was 97th at 30:37, Meggan Fountain took 102nd in 31:05 and Syria Crain was 122nd in 41:10.
Christ Episcopal School’s Noah Watson won the state title with a time of 19:38.
Teammate Myrina Brown was second in 20:36, followed by Highland Baptist Christian School’s Ella Blake’s 20:37, Simpson’s Dakota Miller’s 20:38 and Highland Baptist Christian School’s Amelia Perelllo rounded out the top five in 20:57 in a field of 122.
Christ Episcopal School won its second straight state title with 60 points in a close competition, as Highland Baptist Christian School was second with 66.
Central Private was third with 89, followed by Glenbrook School’s 110 and Hornbeck rounded out the top five with 158, as 17 teams posted points.
Mt. Hermon School came in 14th with 342.