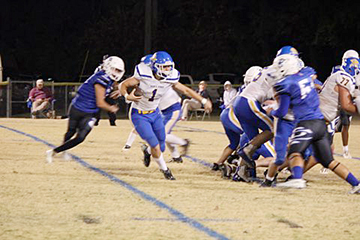 Ben’s Ford Christian School was topped by Porter’s Chapel Academy, 36-30, in Friday’s Class 2A state playoff game on the road.

“This season was a step in the right direction for us, a turnaround for us because we won some ball games that we weren’t even close to winning last year,” Ben’s Ford Christian School coach Destin Pittman said. “We were in ball games with everybody for the most part. We had opportunities to win games.”

“The group was sophomores when I took over the program here,” Pittman said. “They’ve always been a consistent group and hard working group. Their impact on the program and their leadership has laid a good foundation for the kids for what we have to do to be successful.”

Eighth-seeded Porter’s Chapel Academy, who is 5-5, will face top-seeded Tunica in the second round. Tunica had a bye in the first round and is 10-0 this year. Tunica’s last game was on Oct. 21 and was a 45-6 win over Marvell Academy.