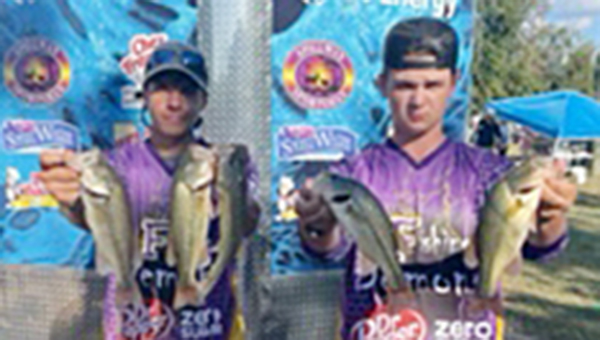 Franklinton’s Landon Campagno and Will Harmon show off their catches.

Each boat is considered a team.

Franklinton’s team of William Harmon and Landon Compagno reeled in five fish that weighed a total of 4.94 pounds of fish for a tie in 63rd place.

The Demons group of Tyler Brumfield and Braylon Magee caught one fish that weighed 1.22 pounds for 144th.

Nicholas Duncan and Garrett Barber had three fish that weighed in at 2.61 total pounds, which was 107th.

Brady Polk and Hunter Frost caught two fish that had a total weight of 2.1 pounds and came in 124th place.

Levi Spears and Tyler McKenzie had one fish with a weight of 1.47 for 139th.

Cohen Kennedy and Easton Barber came in sixth place with a total weight of 4.8 for their three fish.

Colt Penton and Jacob Cutrer had a total weight of 1.66 pounds for 14th place for four fish because of being penalized.

“We had more kids this time,” Pine coach Jason McKenzie said. “Kids are showing more interest, but it was tough fishing for everybody.”