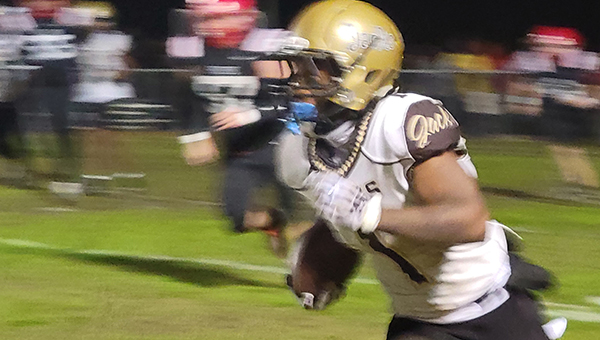 Bogalusa's Talik Williams runs with the ball in Thursday night's game at Pine.

Bogalusa scored two early touchdowns and jumped out to a 16-0 lead before the halfway mark of the first quarter in a 56-15 District 7-3A win over Pine on the road Thursday.

“It just kind of gets us pumped up,” Bogalusa coach Cyril Crutchfield said about the start. “Kids feed off emotion, so it was a good way to start the game off.”

Ashton Levi had a huge game, unofficially throwing for 472 yards and five touchdowns.

Bogalusa forced a turnover in downs on the game’s first drive and scored three plays later when Talik Williams scored from a yard out. Levi ran in for two for an 8-0 lead with 9:21 to go in the first quarter. The touchdown was set up when Levi connected with Desmond Ramirez for 52 yards on the first play.

Bogalusa’s Jamarian Magee intercepted a pass on the next drive.

After an incompletion, Levi threw to Aquinas Roberts for a 46-yard score. Levi ran it in for two and a 16-0 lead at the 7:28 mark.

After the fast start, Bogalusa continued to play solid defense and special teams scored a touchdown as well.

Bogalusa had goal-to-go on its next two drives, but Pine forced turnovers with Thomas Benard recovering a fumble and Preston Stogner intercepting a deflected pass.

Bogalusa went up 24-0 with Levi running 5 yards for a touchdown and then finding Reynis Morris-Payne for two with 3:27 on the clock. The score was set up by some trickery when Levi threw backwards to Morris-Payne, who threw to Levi along the right sideline for a 63-yard play to the 3.

Pine got on the board when Luke Spears threw a touchdown pass to D.J. Stogner. James Owens ran it in for two to make it 24-8 with 1:19 left in the second quarter.

But Bogalusa was back on the board quickly when Dyron Jackson returned the ensuing kickoff 75 yards. The two-point conversation was no good, keeping it 30-8 at halftime.

Bogalusa scored the first three touchdowns of the second half.

The first two were in the third quarter, as Levi connected with Ramirez and Roberts on passes of 78 and 52 yards. The first two-point attempt was no good, but the second was successful, with Levi throwing to Morris-Payne. It was 44-8 with 2:40 left in the third.

Bogalusa scored early in the fourth on a 59-yard run by Williams for a 50-8 lead after the two-point conversion was no good.

Pine’s Von Johnson scored on a 6-yard run and Austin Warren made the extra point with 2:12 to go.

Bogalusa added one more touchdown on a 40-yard pass from Levi to Michael Burton for the 56-15 final.

Bogalusa’s next game will be against Albany to cap off the regular season. The location is to be determined. The game was originally scheduled to be played at home on Nov. 4, but according to Bogalusa City Schools Superintendent Lisa Tanner, Albany does not want to play at Bogalusa because of the recent violence in the community. The district voted 3-2 to have the game played on a neutral site and Tanner said Bogalusa will appeal that decision.

“We had a little bit of a competitive edge on us,” Crutchfield said. “We’re a little upset over what they’re trying to do to us. We felt like we had to come out and make a statement. It basically came down to Pine’s principal, Sumner’s principal and Albany’s principal over something that really didn’t involve my kids. And if that’s the case, we shouldn’t have any games in New Orleans, we shouldn’t have any graduations at Southeastern, so we felt like it was something behind that. Albany is next.”