BHS jumps to No. 9 in rankings, will play Pine 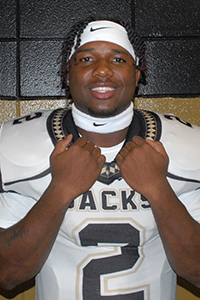 Bogalusa did not play last week, but it didn’t keep the Lumberjacks from continuing to move up the Class 3A rankings in the Louisiana Sportswriters Association’s high school football poll released Tuesday.

Bogalusa, with a 6-1 record, received 38 points in the poll and was ranked No. 9. The Lumberjacks had previously been ranked No. 10.
Union Parish, at 7-1, remained at No. 1 overall, with 127 points including eight of 11 first-place votes. The rest of the rankings from 2-8 were E.D. White, Church Point, St. James, Iowa, University, Madison Prep and Carroll. Parkview Baptist had been unranked before entering the poll at No. 10.

Bogalusa’s most recent game was a 46-27 home win over Jewel Sumner on Friday, Oct. 14. The Lumberjacks’ only loss of the season was a 24-18 defeat at home to Slidell on Friday, Sept. 16. Slidell was unranked in the Class 5A poll, but was among the teams also receiving votes.

Bogalusa will play at Pine on Thursday night.