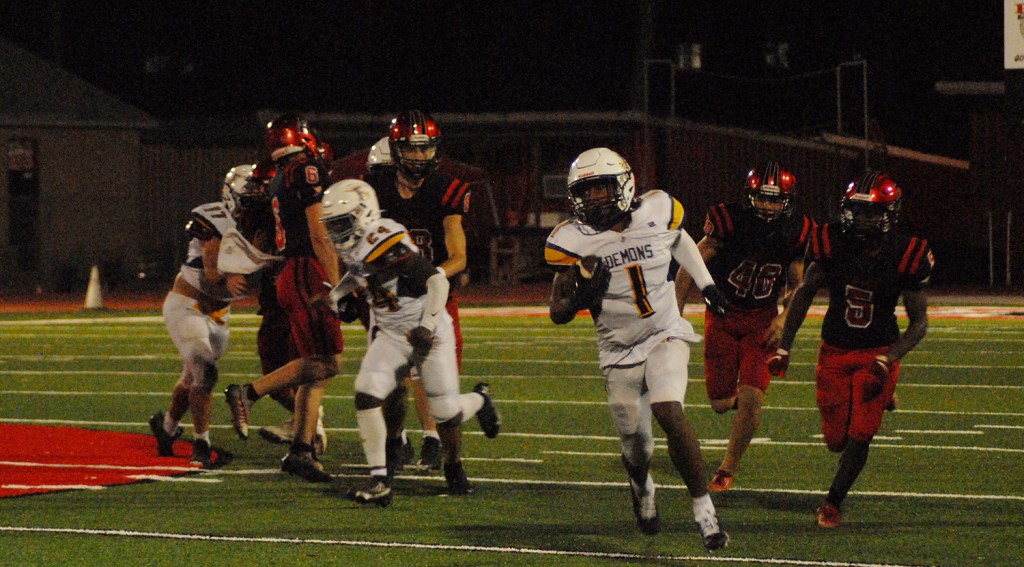 DAILY NEWS PHOTO/Chris Kinkaid Franklinton’s Kelly Daniels runs with the football in a game this year.

Franklinton outscored Pearl River 21-6 in the second half of a 26-13 victory in a District 8-4A game on the road Friday.

“I’m happy for the win,” Franklinton coach Guy LeCompte said. “I think Eric Collins is a good coach and his record shows it. His kids were prepared and they played hard and I was happy we came out with the win. I’m proud of our kids and their effort. We’re making improvements each week. We were penalized a lot last week and there’s things we need to correct moving forward.”

Micah Hart rushed for 98 yards and two touchdowns on 14 carries.

Kelly Daniels tallied 80 yards and a touchdown on his only rush. He also caught two passes for 43 yards.

Daniel Bryant made a catch for 12 yards.

Zion Anders threw for 55 yards and ran for nine.

Franklinton is 4-3 overall and 2-0 in district. Franklinton has won three in a row. The Demons are ranked 12th in the non-select power ratings according to www.geauxpreps.com.

Pearl River is 4-3 overall and 1-1 in league play. Pearl River is 21st in the non-select Division II power ratings according to www.geauxpreps.com.

Timothy Partman made 10 tackles with a sack and a stop for a loss.

Banyan Penton recorded six tackles with one for a loss.

Andre Callais made five stops with two for a loss.

Skylar Williams and Elijah Tate both recovered a fumble.

Franklinton will be back in action on Friday against Salmen. The game will be played at Lakeshore.

“Salmen is very talented,” LeCompte said. “They have a lot of speed. Eric Chuter is a good coach. They’ve been in a lot of close games. One thing that stands out is that they play hard until the end.”

Four of Salmen’s seven games have been decided by one possession and Salmen is 2-2 in those games.

These teams met last year and Salmen won 39-14. Salmen has won the last two meetings between these two teams.

Salmen is ranked 33rd in the non-select Division I power ratings according to www.geauxpreps.com.