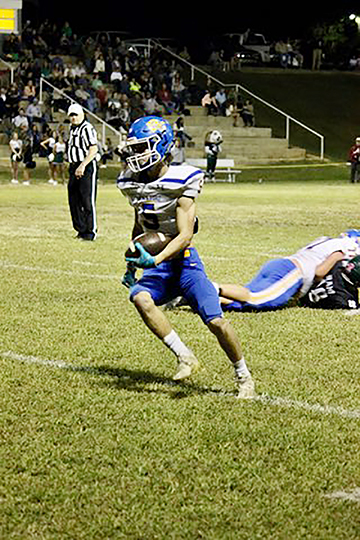 Ben’s Ford ended the 2022 regular season with a 68-18 victory over Kemper Academy in a District 2A2 contest on the road on Friday.

“We came out and ran the ball effectively and it opened up the passing game for us,” Ben’s Ford Christian School coach Destin Pittman said. “The defense had a few hiccups early in the game, but we were able to make a few adjustments and shut down their offense.”

Caleb Mathews ran six times for 146 yards and a touchdown.

Jonah Holston rushed just twice, but for 104 yards and two touchdowns. He also caught one pass for 46 yards and a touchdown. Defensively, he intercepted a pass.

Michael Easterling returned a kickoff 55 yards for a touchdown. He also ran twice for 13 yards and a score. Defensively, he made seven tackles with one for a loss.

Gage Adams had a rush for eight yards and he caught a pass for 14 yards. He also made three tackles.

Nate Descant made two catches for 69 yards and two touchdowns.

Defensively, Ezra Nobles posted four stops with a sack and 2.5 for a loss.

Caden Pajak made a tackle for a loss.

Jonah Williams made 0.5 stops and intercepted a pass.

Ben’s Ford Christian School went 4-5 in the regular season and 3-2 in league play.