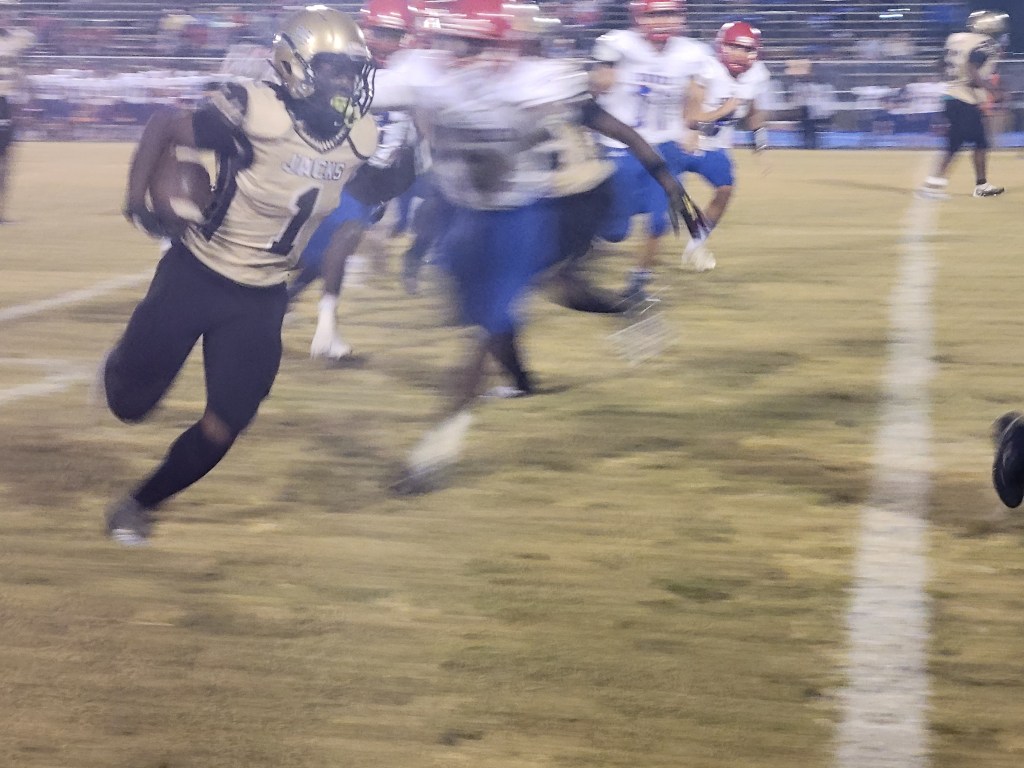 Bogalusa defeated Jewel Sumner, 46-27, in a District 7-3A game on Homecoming night at BHS.

The game was called with 4:08 to go after gunshots rang out.

Bogalusa led 16-14 at halftime and went up 24-14 early in the third quarter when Ashton Levi threw a touchdown pass to Aquanis Roberts on a 39-yard touchdown pass. Levi ran in for two to make it a 10-point game with 9:25 left in the third period.

Jewel Sumner had a chance to trim the lead to one possession, but Bogalusa’s defense made a big stop on fourth-and-3 from the Lumberjacks’ 8, forcing a turnover on downs.

Bogalusa then drove 94 yards in 11 plays with Levi finding Reynis Morris-Payne on a 19-yard touchdown pass. Levi made the two-point conversion for a 32-14 lead with 10:30 left in the fourth quarter.

But Jewel Sumner scored just 17 second later with Wyatt Clark completing a 63-yard touchdown pass to Rodney Brown on the first play of the next drive. Eli Neyland made the extra point and it was 32-21 with 10:13 left.

Bogalusa was back on the board on the next drive that ended with Levi going 17 yards for the score and then throwing to Morris-Payne for the two-point conversion for a 40-21 lead at the 8:39 mark.

Once again, Jewel Sumner got it back to two possessions on the drive. Darren Thomas tallied after running it in from the 40. Jewel Sumner’s fake extra point was no good, keeping it 40-27 with 7:23 left.

Bogalusa tallied on the next possession with Levi throwing to Talik Williams on a 9 yarder with 4:08 left. After the touchdown, gunshots rang out and the game was called.

Jewel Sumner got on the board first after taking the opening kickoff nine-plays, 75 yards in 6:21, capped off by Thomas’ 10-yard run to make it 7-0 after Neyland’s extra point.

Bogalusa came back quickly on its first possession, going 52 yards in eight plays that ended when Levi scored on a 7-yard run. Levi converted the two to make it 8-7 with 3:59 left in the first quarter.

Jewel Sumner went back in front in the second period when Clark snuck in from a yard out for a 14-8 lead at the 8:23 mark.

Once again, Bogalusa responded with Levi connecting with Morris-Payne on a 14 yarder. Levi ran in for two and a 16-14 lead with 6:47 left.

It stayed that way through halftime.

Levi unofficially threw for 290 yards with four touchdowns and he unofficially ran for 83 yards and two scores. Levi ran for four two-point conversions and passed for one.

Williams unofficially had 70 yards on the ground and a touchdown catch.

Bogalusa is ranked second in the Division III non-select power points ratings according to www.geauxpreps.com and the Lumberjacks are ranked 10th in the Louisiana Sports Writers Association Class Poll.

Jewel Sumner is 10th power points ratings according to www.geauxpreps.com.

Bogalusa has a bye this week. The Lumberjacks’ next game will be on Oct. 27 against Pine on the road.