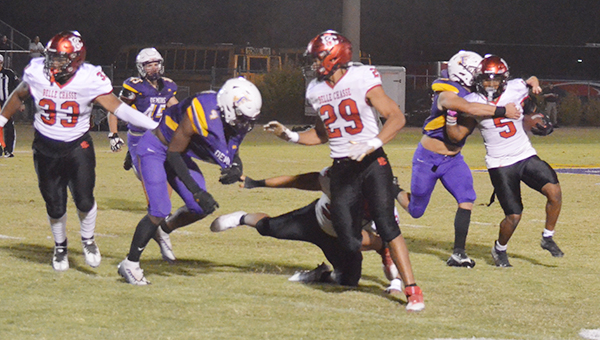 Franklinton’s defense came up with a key stop on fourth down from its own 26-yard-line, as the Demons held on for a 24-17 win over visiting Belle Chasse on Friday night.

With 47 seconds left, Franklinton held a 24-17 lead as the visiting Cardinals called their final timeout, facing fourth-and-2 from the Franklinton 26. Running back Jaedon Voisin took the handoff and tried to find a hole, but the Demons’ defense stood strong and held him to just a 1-yard gain.

From there, Franklinton quarterback Zion Anders knelt to run the rest of the clock out. The Demons gave Belle Chasse its first loss of the season, as the Cardinals fell to 4-1 while Franklinton improved to 2-3.

“We handled a lot of adversity in this game,” Franklinton coach Guy LeCompte said. “We’d love to start developing some winning habits and building a winning culture, and I think our kids were able to get a little taste of that tonight.”

Belle Chasse opened the scoring with a 23-yard field goal by Trey Furey with 4:16 left in the first quarter. Franklinton answered on the next drive, when Kade Lavigne was good on a 35-yard field goal with 11:55 remaining in the second quarter.

A special teams miscue gave the Cardinals the chance to go ahead. Franklinton faced fourth-and-16 from its own 39 and went back to punt, but the snap got away and the Demons had to fall on it. Belle Chasse took over at the Franklinton 27.

Six plays later — all runs — the Cardinals moved ahead when Aedon Westbrook ran for a 6-yard touchdown and Furey added the extra point with 4:27 left in the first half.

“Tonight was one of those games where we took one step forward and two steps backwards at times,” LeCompte said.

It didn’t take the Demons long to tie the game after the start of the second half. Franklinton’s Timarion Partman returned the opening kickoff from the Demons’ 29 down to the Belle Chasse 45. Anders completed the scoring drive with a 17-yard run. Lavigne added the extra point to tie the game at 10-10 with 8:26 left in the third quarter.

The second half featured both teams making major mistakes. Belle Chasse attempted a 27-yard field goal with 57 seconds left in the third quarter but it was no good. On the very next play, Franklinton fumbled the ball and the Cardinals recovered it at the 14, giving them possession in the red zone.

Franklinton finally broke the tie with 5:55 left in the game, when Senqualon Conerly ran for a 10-yard touchdown. Lavigne’s extra point was no good, but the Demons still led 16-10.

Belle Chasse returned the ensuing kickoff from its own 8 to the 34, and then scored on the following play. Quarterback Stone Meyers completed a 66-yard touchdown pass to Jeremiah Moses, and Furey added the extra point to put Belle Chasse back in front, 17-16, with 5:33 left in the game.

The Demons regained the lead on the following drive, which started at their own 34. Franklinton took five plays to advance the ball to the Belle Chasse 44, and from there Anders found Kelly Daniels open for a touchdown reception. Anders kept the ball for the two-point conversion, putting Franklinton ahead 24-17 with 2:43 left in the game.

From there, the Demons came up with the fourth-down stop on Belle Chasse’s final drive.