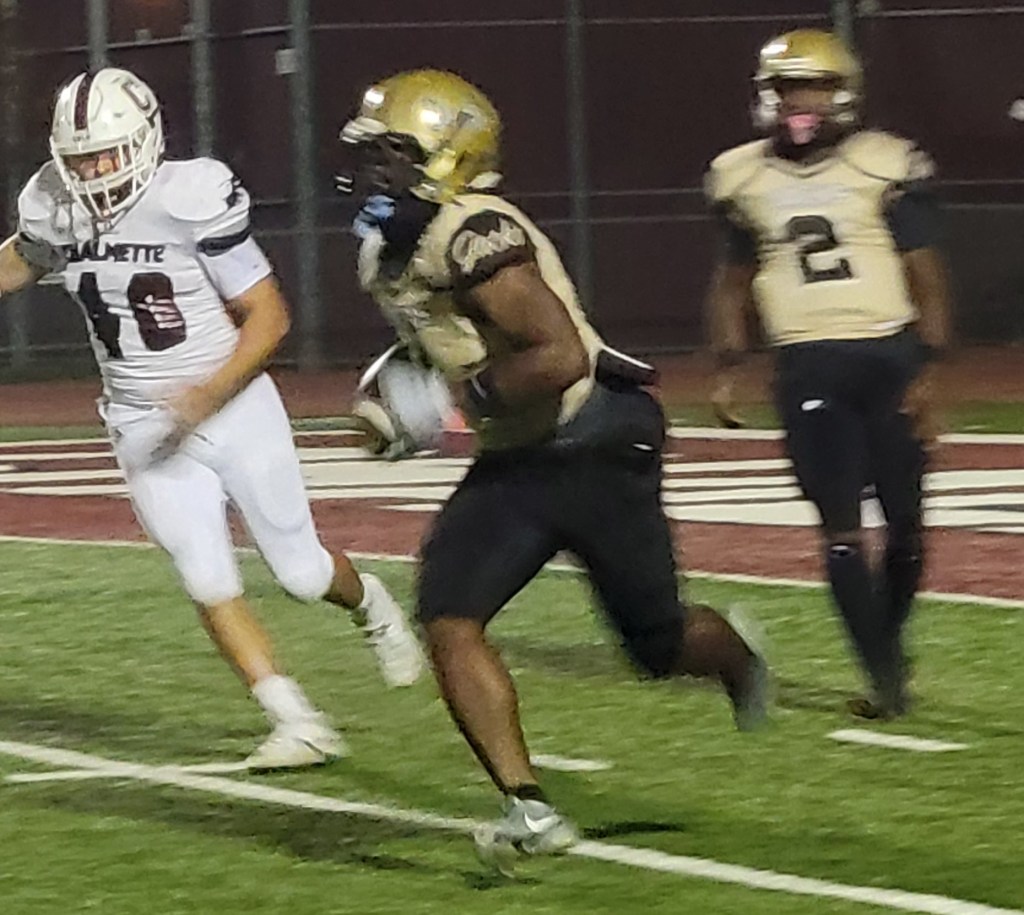 CHALMETTE — Bogalusa made big plays on offense and defense down the stretch in a 52-36 victory over Chalmette in a road game that was held on Friday.

Bogalusa took a 38-23 lead into the fourth quarter, but Chalmette scored two touchdowns in the first minute of the final period.

Bogalusa punted to start the quarter and the Owls scored on the first play of the drive when Ethan Couvillon completed a 45-yard pass to Ty Abadie to make it 38-30 after Brandon Ramirez hit the extra point with 11:33 left.

Chalmette recovered the ensuing kickoff and scored on first-and-16 from Bogalusa’s 35 with Couvillon connecting with Kai Williams for the score. The two-point conversion was no good, keeping it 38-36 at the 11:03 mark.

Bogalusa punted on its next possession.

Chalmettte started at its 18 and drove its 43, but Bogalusa’s  defense got the stop it needed, forcing a turnover on downs at Chalmette’s 43 with 5:49 left.

Then the offense went to work and was in the end zone in five plays when Ashton Levi tallied on a 5-yard run to make it 44-36. Levi then got the important two-point conversion to make it a two-possession game at 46-36 with 4:25 on the clock.

Bogalusa’s defense came up big once again on the next possession and forced a turnover on downs at Chalmette’s 18.

Bogalusa found the end zone at the 2:34 mark with Levi connecting with Reynis Morris-Payne on a 19 yarder to make it 52-36.

Tydarius McGowan intercepted a pass on the second play of Chalmette’s final drive with 1:56 left and Bogalusa ran out the clock in the 52-36 victory.

The teams played a high-scoring first half.

Bogalusa led 8-7 after the first quarter, as both teams scored on their first possession

Williams put Chalmette on the board with a 17-yard run and Ramirez made the extra point for a 7-0 lead with 7:27 left in the first quarter.

Bogalusa countered with Ashton Levi running 20 yards to paydirt. Levi converted the two-point conversation for an 8-7 advantage with 6:03 to go in the first quarter.

The second quarter was action packed, as both teams scored two touchdowns.

Chalmette retook the lead when Kyron Angeletti tallied on a 1-yard run and then converted for two to make it 15-8 with 9:09 on the clock.

Bogalusa went back in front with Talik Williams running for a 24-yard touchdown. Levi connected with Morris-Payne for two and a 16-15 lead at the 6:09 mark

The teams then exchanged touchdowns in the final minute of the half.

Chalmette went in front when Couvillon threw a 36 yard touchdown pass to Jaden Lapeyrouse. Angeletti was good for two for a 23-16 Chalmette lead with 59 seconds left.

But Bogalusa wasn’t done in the first half.

Levi threw a 13-yard pass to Desmond Ramirez on the final play of the first half and Levi was good for two more and Bogalusa led 24-23 at halftime.

Bogalusa is 4-1 this season and will start District 7-3A play on Friday with a road game against Amite.

Chalmette is 2-3 and will play East Jefferson at home on Friday in their District 8-5A opener.