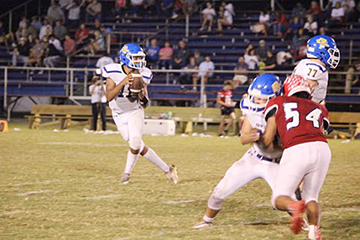 Ben’s Ford Christian School was defeated by Tensas Academy, 56-34, in Friday’s game on the road.

“It’s very similar to the week before, up in the first half and couldn’t finish in the second,” Ben’s Ford Christian School coach Destin Pittman said.

Ein Knight threw for 105 yards and a touchdown and he ran for 81 yards and three scores.

Gage Adams caught a pass for 30 yards and ran for 24. Defensively, Adams made four tackles.

Dashell Houston had 18 yards on the ground. Houston had four stops on defense and 0.5 for a loss.

Jonah Holston made five catches for 62 yards and a touchdown. Defensively, Holston led Ben’s Ford in tackles with 5.5.

Michael Easterling made 4.5 stops with 0.5 for a loss.

Brantley Dyess tallied four tackles with one for a loss.

Ben’s Ford will play again on Friday against Christian Collegiate Academy in a District 2A2 game on the road.

“We’re back in the district,” Pittman said. “Us and Newton are undefeated in district, so this could set up the district championship.

Christian Collegiate Academy is 4-2 this season and won its game last week, 44-12.

Ben’s Ford Christian School is 2-0 in district, while Christian Collegiate Academy is 2-1.