2nd half hurts Ben’s Ford in loss to Porters Chapel 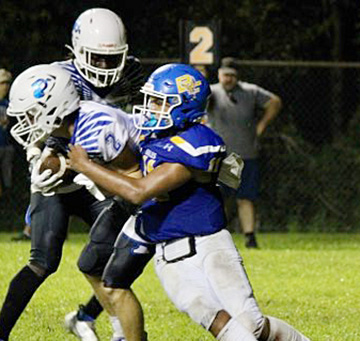 Ben’s Ford Christian School led 20-18 at halftime, but allowed 12 unanswered points in the second half in a 30-20 loss to Porters Chapel Academy at home Friday night.

Defensively, Gage Adams made 14 tackles with 11 of them being solo stops.

Brantley Dyess and Dashell Houston both had 3.5 tackles. Dyess made 1.5 stops for a loss and 0.5 sacks.

Ben’s Ford Christian School is 3-2 this season, while Porters Chapel is 3-1.

Ben’s Ford Christian School will be back in action on Friday against Tensas Academy on the road.

Tensas is 3-1 after they were defeated by Riverdale Academy, 14-12.

“They’re ranked No. 1 in 1A,” Pittman said. “They’re a big, physical team, but I’m hoping our depth will take over in the second half. We’re going to run it right at them and try to wear them down.”

Tensas was ranked No. 1 by Impact Sports going into last week’s action.