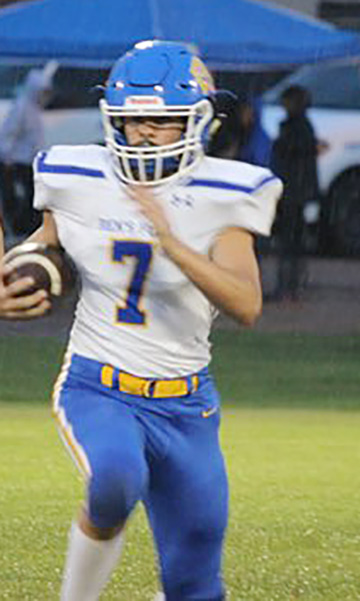 Ben’s Ford Christian School was up 32-0 after the first quarter and 46-0 at the half.

“It was a good team effort overall. We got up pretty early and our young guys got some good work after that,” Ben’s Ford Christian School coach Destin Pittman said.

Ben’s Ford did not attempt any passes and nobody had more than six carries, which was Patrick Easterling. Easterling ran six times for 76 yards and a touchdown.

Caleb Mathews had 71 yards rushing with a touchdown on his only carry. Defensively, he made 0.5 stops, which was for a loss.

Jonah Holston had a 60-yard touchdown run on his only attempt.

Ein Knight tallied 48 yards and a touchdown for his only rushing attempt.

Michael Easterling ran for 42 yards and a score on two carries. Defensively, he posted three tackles.

Dashell Houston ran for 13 yards and a score on three attempts. Defensively, Houston intercepted a pass.

Defensively, Aaron Forbes made 4.5 tackles to lead the team with 1.5 for a loss.

Brian Burks had 2.5 stops and two for a loss with a sack.

Ezra Nobles had two tackles with 1.5 for a loss.

Steven Thibodaux and Justin Gonzales both recorded two tackles with one for a loss.

Brantley Dyess and Asher Nimmo both made 0.5 tackles, which were for a loss.

“This Friday’s going to be more of a challenge than what we had this past week,” Pittman said. “We’re going to have to be ready more mentally than physically because they line up in a bunch of different offensive sets and they like to use their speed, so we’re going to have to keep them contained.”

Porters Chapel is 2-1 this season. They were on a bye week last week, but defeated Discovery Christian School, 60-0, the week before.