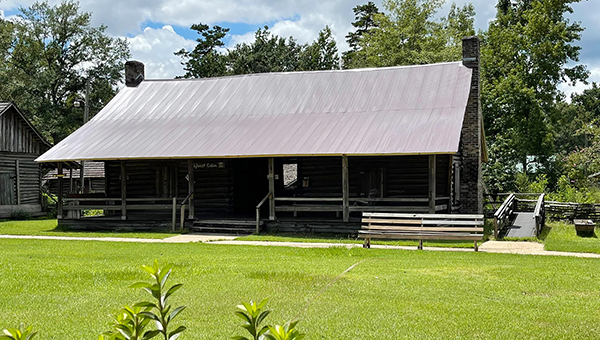 The new roof at the Sylvest Cabin is installed and ready to go as the Washington Parish Free Fair approaches in October.

In March 2021, a tornado ripped through the Washington Parish Fair Grounds and left in its wake a trail of destruction. Most heartbreaking to many was the damage to the Sylvest Cabin, one of Mile Branch Settlement’s largest cabins and arguably the anchor of the settlement.

With the work of tireless volunteers, the cabin roof was temporarily repaired, and fairgoers were able to visit the cabin and pay homage to one of the Sylvest descendants and 2021 Mile Branch Honoree, Mrs. Martha Davis. Mrs. Davis was raised in the Sylvest cabin, and at a recent meeting of the fair committee, she spoke in regard of the decision to replace the damaged roof more permanently with metal rather than wood shingles.

It was a difficult decision for the Building and Grounds Committee, but the cost of metal versus individually cut wood shingles made the choice one of necessity. Mrs. Martha explained that of the Sylvest descendants who are Mile Branch volunteers and keep the cabin’s history alive, none were opposed to replacing the roof with metal. She further stated that when the cabin was donated to the Fair Association when the settlement was established, it had a tin roof and so it was in her memories from childhood.

Mrs. Davis is simply pleased that the cabin is back and is a sign of recovery from the awful storm in 2021. She and her family, along with all the Mile Branch Settlement volunteers, invite everyone to visit during this year’s fair and take a trip through Washington Parish history.

This article was submitted by Toni Tageant, who is a member of the Washington Parish Free Fair Association. 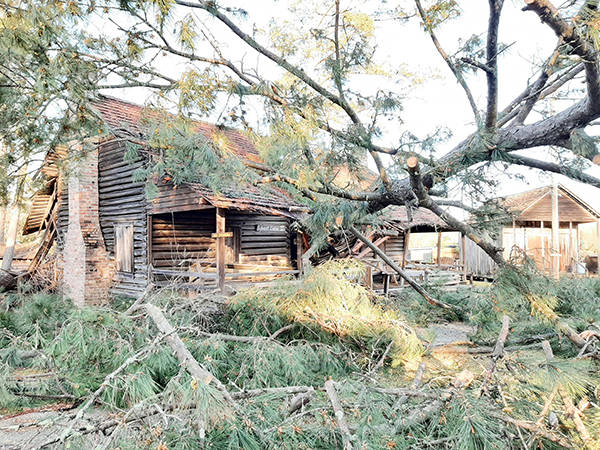 The cabin was badly damaged by weather in March of 2021.