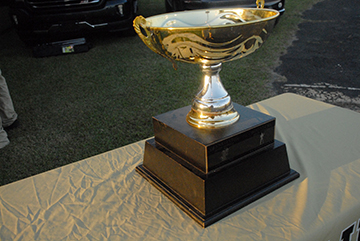 DAILY NEWS FILE PHOTO/Chris Kinkaid Bogalusa and Franklinton will play for the Pine Burr Trophy on Friday at Bogalusa.

The Pine Burr Trophy is on the line as Bogalusa hosts Franklinton in a week one match up on Friday.

Bogalusa has won the last three games against Franklinton, including last year’s 48-42 win.

Bogalusa won their game, 21-0, over South Plaquemines, while Franklinton was defeated by Slidell, 27-0.

Bogalusa is No. 10 in the Crescent City Sports Preseason Rankings in Class 3A.

When asked about the offseason, Bogalusa coach Cyril Crutchfield said it’s a work in progress.

“We’re working to improve,” Crutchfield said. “You’re looking to see improvement from the jamboree to week one. We want fundamentally sound and technique savvy.”

“Our focus this week is to lineup and execute, it’s that simple,” LeCompte said.