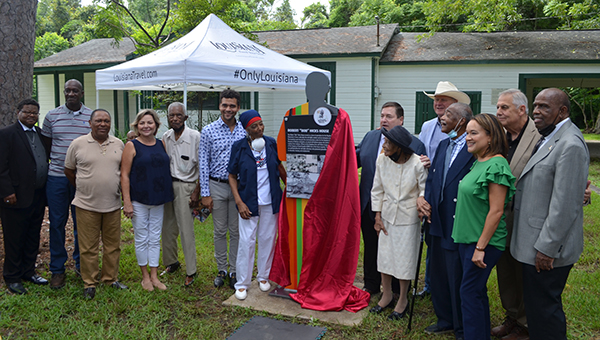 The marker is located in front of the Hicks family home, where civil rights activities and lawsuits were planned and orchestrated and where civil rights activists were housed and treated. The house is at 924 Robert “Bob” Hicks St. and rain stayed away long enough for members of Hicks’ family and other dignitaries to reveal the marker for the first time Thursday morning.

Prior to the marker’s unveiling, a presentation was held at nearby Bethlehem Baptist Church to mark the occasion.

“(Robert Hicks) was an ordinary man with the courage to do extraordinary things,” Nungesser said.

Hicks’ daughter, Barbara Hicks Collins, became emotional and had to stop her remarks at several points to catch her breath or wipe away tears. She said she remembered asking her late father why they had to protest, if the Civil Rights Act of 1964 was already the law of the land.

“I learned that we shouldn’t have had to (protest),” she said. “But laws do not change the hearts of men. We’ve come a long ways from that day.”

The Robert “Bob” Hicks House served as the base of operations for the Bogalusa civil rights movement. It was a regular meeting place for the officers of the Bogalusa Civic and Voters League (BCVL) and the local Chapter of the Congress of Racial Equality. The house was a safe place for civil rights workers and served as an emergency triage station.

The breakfast room became the communications center for the Bogalusa Chapter of the Deacons of Defense and Justice, an armed self-defense group who protected civil rights workers from violence. The living room was an unofficial office for the civil rights attorneys who pioneered groundbreaking lawsuits in education, housing, and employment. In 2015, the Robert “Bob” Hicks House was listed on the National Register of Historic Places.

Hicks is perhaps best known for his leadership in founding the Bogalusa Chapter of the Deacons for Defense and Justice. He later served as president and vice president of the BCVL. In August of 1967, Hicks joined civil rights activists A.Z. Young and Gayle Jenkins to lead the Bogalusa to Baton Rouge March, referred to as the “105-mile gauntlet.” While facing substantial opposition requiring protection from National Guardsmen and police, the march grew from 25 to 600 people during the journey. In August of 2021, a Louisiana Civil Rights Trail marker was installed at A.Z. Young Park in Baton Rouge, honoring the courage of those men and women.

In 2021, the first series of Louisiana Civil Rights Trail markers were installed at Little Union Baptist Church in Shreveport, Dooky Chase’s Restaurant in New Orleans, and the Louisiana Old State Capitol and A.Z. Young Park in Baton Rouge. In 2022, a second series of markers have been previously installed at McDonogh 19 Elementary School in New Orleans and the Louisiana Maneuvers and Military Museum in Pineville.

“This journey is going to continue,” Nungesser said Thursday. “We’ve still got so many stories to share across this state.”

“We’re glad to be a part of a trail that recognizes heroes,” White said. “Not only did the (Bogalusa to Baton Rouge marchers) have the heat (from the weather), but they also had the ‘heat’ of citizens who tried to stop them.”

Perrette presented the Hicks family members with a city proclamation.

“It’s so important for our children to learn from the past, so we don’t go back to the past,” she said.

The ultimate goal is to convert the Robert “Bob” Hicks House, and the nearby 1906 Mill House, into a full-time civil rights museum.

Hicks’ son, Charles Hicks, spoke Thursday and thanked all the other marchers who participated in that historic event, including but not limited to A.Z. Young and Gayle Jenkins.

“Sometimes you need to have someone take the first step, and other people will follow,” he said.