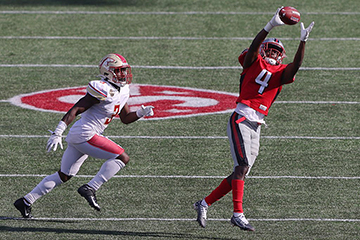 COURTESY PHOTO Derrick Dillon, who graduated from Pine in 2015, catches a pass in a USFL game this season. Dillon signed with the Cleveland Browns on Monday.

Derrick Dillon has signed with the Cleveland Browns.

Dillon, who is a 2015 graduate of Pine High School, played for the Tampa Bandits of the USFL this season.

Dillon made 28 catches for 386 yards and four touchdowns.

Dillon is back in the NFL for the first time since the 2020 season when he was with the New York Giants. He was released after the 2021 camp.

The Browns’ first preseason game will take place on Friday when they play a road game against the Jacksonville Jaguars with kickoff set for 7 p.m. eastern time.