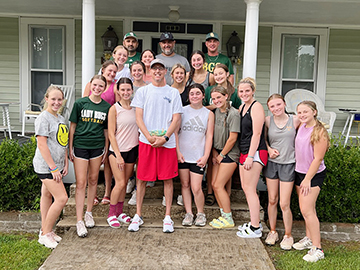 COURTESY PHOTO/Kim Burris Former Bowling Green coach/athletic director Pat King (shown in the first row wearing a hat) is surrounded by the Lady Buccaneers softball team after they brought him donations from a benefit held for King.

“As far as (Bowling Green School) coach David Hood (Burris) and his staff and the young ladies at Bowling Green, my family and myself cannot thank them enough for their love and support and their prayers. I want to thank them for getting the ball rolling for that benefit tournament with the idea of doing something for my family. We love them and thank them and look forward to watching them go through this journey of the softball season. We wish them nothing but the best,” King said.

“We are continuing to pray for him every single day and so are the other schools in our district,” Burris said.

The Lady Buccaneers had practice the next day, but with rain on the way, Burris decided to cut practice short and the team went King’s house and brought him the monetary gift.

“They wanted to bring me the monetary gift, but I thought it was cool that the whole team came,” King said. “It was overwhelming. I got choked up. The benefit tournament was great, but for them showing up was overwhelming, but at the same time, it was a beautiful thing. David Hood and those girls, it’s more than just softball for them, they do a great job in the community.”

Burris said that he figured that King seeing all of the girls would lift his spirits and encourage him to continue to get better.

“I just wanted him to realize that he is on our players’ minds and in their prayers everyday,” Burris said.

King was diagnosed with colon cancer in March and started treatment in April.

“I’ve had my midpoint scan and there were signs of improvement and I’m feeling pretty good,” King said. “I’m keeping a positive outlook that God can do all things. I am feeling better. All of my bloodwork and test results are indicating that my body is responding well to the treatments. We’ll continue to pray, listen to the doctors and we’ll run this race called life with grace and mercy provided by my Lord and Savior Jesus Christ.”

King graduated from Bowling Green in 1996.

He was the head coach of the fastpitch softball team the first 12 years the school had it.

He also coached basketball for 19 years between boys and girls.

King was also the school’s athletic director for his last three years.