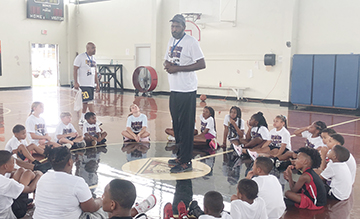 COURTESY PHOTO Nikita Wilson speaks to campers at a previous Sports Work Academy Basketball Camp. This year’s camp is being held on July 23.

The camp will take place at the Ave B YMCA on July 23 starting at 9 a.m.

Galloway said they have confirmed the return of Coach O’Brian Calahan, founder and head coach at Only Basketball Elite, a top tier sports program that teaches aspiring athletes the foundational skills to excel. Calahan attended Jonesboro Hodge High School, where he was an all-state performer and district MVP. Calahan went on to play at Alcorn State and Tennessee Temple University.

Murrell Galloway, who is a 1987 Bogalusa High School graduate, will return as the coach’s captain.

Registration for the camp will begin at 8:30 a.m.