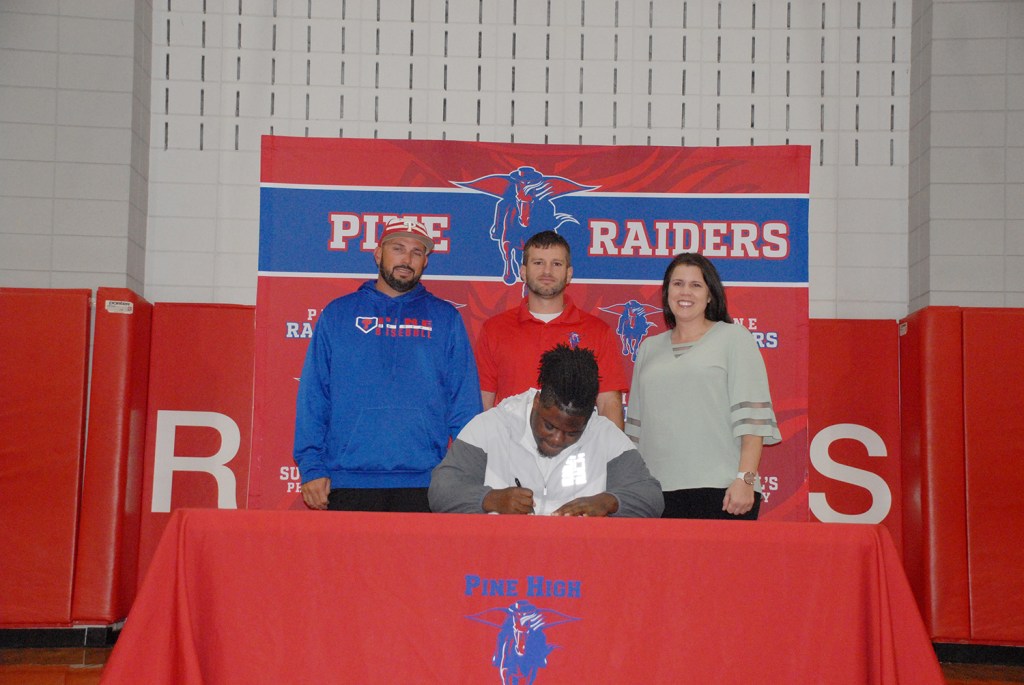 Pine’s Cam Brown has signed a letter of intent to attend the College of Wooster and play football for the Fighting Scots.

The College of Wooster is located in Ohio about an hour, 10 minutes from Cleveland, Ohio.

“I was looking at them for a while,” Brown said in April. “I had never really contacted none of their coaches or nothing and I just so happened to have talked to them like two, three months ago. It’s a really nice community.”

Brown is a defensive lineman. He said he took a virtual tour and said he looked around at the ground on campus.

“I talked to a couple of students and football players and some coaches and they were like, it’s a wholesome community to be a part of and that’s just what I’m looking for and got some great teammates over there too,” Brown said.

Brown said he is very excited.

“I’m just blessed and grateful that I have this opportunity. Just glad I get to further my football career and make my family proud,” Brown said.

Brown said that one of his strengths is that he gets after it.

“I’m not afraid to do the dirty work and get dirty. I feel like I really do put in a lot of the work that most guys don’t even think about and I really feel like that’s what sets me apart from a lot of football players,” Brown said.

This year, Brown was a first-team all-district defensive lineman.

Pine coach Bradley Seal said that Brown is a really good football player, but said he also brings good emotion to the team.

“When we started back lifting in January, after a week, the trainer comes up to me and says, ‘I just realized the energy’s off and I just realized that Cam’s not in here and that’s the reason,’” Seal said. “Those are the things that people don’t see, the kind of behind the scenes leader that Cam is. He was the vocal, emotional leader of the team and that’s going to be tough for us to replace, but that’s what he’s bringing to the school he’s going to.”

Brown said that he has had that intensity for as long as he can remember.

“Ever since I was a kid, I have been intense. I’ve always been working out very hard. Everything I do, I do it passionately and I do it hard. I do the best I can do. In the weight room, I’m always active. I’m always getting after it. I’m always pumped up, screaming, stuff like that, trying to hype my teammates up. That’s really just something I feel I can pass on to my teammates is that intensity I have and I’m just glad I can pass that opportunity onto my teammates,” Brown said.

Brown said he plans on majoring in finance or sports medicine.