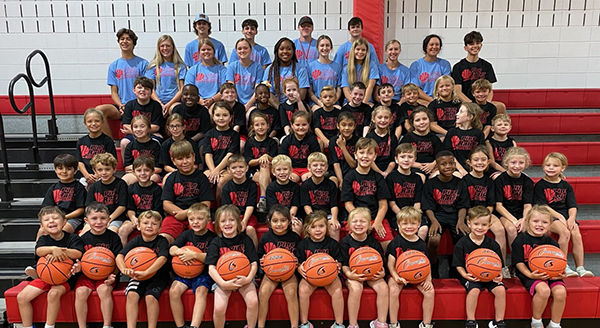 Shown above are some of the campers and instructors at the Raider Basketball Camp.

The Raider Basketball Camp recently gave children a chance to learn the game.

“We had a good turnout,” Pine coach Brett Cooper said. “We had a lot of the younger kids. We worked a lot of fundamentals like dribbling, shooting, passing and defense. We saw a lot of improvement throughout the week.”

Every camper got a basketball.

“We want them to work on those skills,” Cooper said. “That’s what we stressed to them.”

The younger group played games that helped reinforce the skills they had been working on.

The competitions for the second group were hot shot, dribble tag, knockout and free throws.

“Thanks to Mrs. Brett Spears. I couldn’t have done it without her,” Cooper said.

Cooper said that he enjoys doing the camp every year.

“I love basketball,” Cooper said. “I love watching the kids learn the fundamentals of the game and improve everyday. We stressed to them about working hard to improve. It’s great watching the young kids grow up and see what we’ve got coming up in the community.”