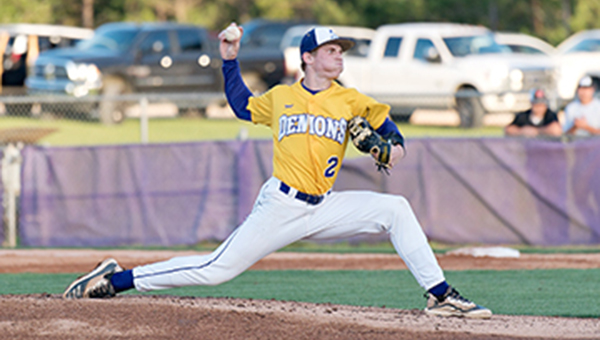 Franklinton’s Micah Wascom delivers a pitch to the plate during a game this season. He was 4-0 with a 0.84 ERA in the Demons’ district games in 2022, earning co-MVP honors in the district.

Franklinton’s Micah Wascom was named the co-MVP of District 9-4A, along with Lakeshore’s Eli Lirette, for the 2022 baseball season.

At the plate, Wascom reached base at a .394 clip with a .333 slugging. He had eight runs batted in with a double, a triple and five runs scored.

“It was pretty cool to win,” Wascom said. “It wasn’t easy for sure. We had Lirette who (also) won it. I talked to him. He’s a really good ballplayer. I’m just honored to get it with all of the good players in the district.”

Wascom talked about his key to success.

“Just working at it, working in the offseason and hitting the weights,” Wascom said. “Just being up by the field and having a great pitching coach (Clay Tageant) and my dad. My dad (Jerod Wascom) is a big help.”

Franklinton coach Jeff Tageant was the District 9-4A Coach of the Year after guiding the Demons to the league title. Franklinton and Lakeshore both went 6-3 in district, but Franklinton won after winning two-of-three from Lakeshore.

“Being coach of the year is quite an honor for me and our program,” Tageant said. “It is a direct reflection of the players, assistant coaches, our administration, teachers and school that are part of the program. Our success is all dependent on their dedication and support.”

Penton batted .360 in district with a .613 on-base percentage and .400 slugging. Penton had a double with six RBIs and three runs scored.

Turner tallied a 1-0 record with a save and had a 1.56 ERA. Turner struck out 13 and walked seven in nine innings of work.

At the plate, Turner posted a .375 on-base percentage and a .308 slugging. Turner doubled twice, drove in two runs and scored four runs in district play.

Wise had a .379 on-base percentage in league play with a .320 slugging. Wise had two doubles, four runs batted in and six runs scored.

Rickey Burkhalter tallied a .433 on-base percentage in district play, with an RBI and six runs scored.

Pace had a .304 on-base percentage in district play, with a run batted in and a run scored.

Rickken Burkhalter posted a .500 on-base percentage in district play, with an RBI and five runs scored.

This season, Franklinton reached the regional round of the playoffs, but lost to state semifinalist Lakeshore, 7-3 and 7-0 in a best-of-3.

Pearl River reached the regional round of the playoffs, but was defeated by quarterfinalist Assumption 4-3 and 10-0 in a best-of-3.