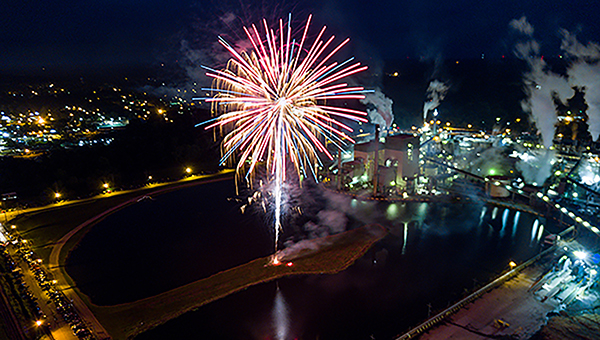 This drone photograph shows the Fourth of July fireworks over the International Paper mill in a recent year. This year, the fireworks will begin Monday, July 4, as soon as night falls. (Daily News File Photo/Matt Parker).

Patriotic Americans in Washington Parish have a large variety of activities to choose from this Fourth of July weekend, ranging from fireworks to parades to voter registration drives.

Bogue Chitto State Park will have an “Independence Day celebration” on Saturday, July 2. There will be lots of music, fun and food. The park is located at 17049 State Park Blvd. in Franklinton.

There will also be a voter registration drive this Saturday, allowing citizens to achieve the patriotic duty of the right to vote. It will be held from 9 a.m. until 1 p.m. at St. John Temple Church of God in Christ, located at 1104 N. Roosevelt St. in Bogalusa.

This drive is sponsored by the Community Action Organization. There will be hot dogs served, for those who register. For further information, call Joel Miller at 985-516-8655.

Finally, on Saturday night at 7 p.m., the 82nd Paper Queen Ball will be held at the American Legion building.

The Bogalusa Fourth of July Parade, sponsored by the American Legion Post 24, will be held Monday at 10 a.m. The theme is “Honoring Our Vietnam Veteran.” There is no cost for participation in the parade.

The city of Bogalusa will hold its fireworks show at dusk/nightfall on Monday. The fireworks will be released over the International Paper mill.

A fireworks show was also planned for Franklinton, but it has been postponed until a later date.