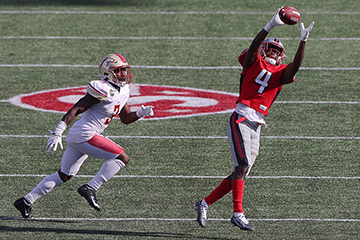 COURTESY PHOTO Derrick Dillon catches a pass in a game this season. Dillon, who is a 2015 Pine High School graduate, played for the Tampa Bay Bandits in the USFL this season. He caught 28 passes for 386 yards and four touchdowns.

The USFL made its return this year and one former player from Washington Parish was on the field for the Tampa Bay Bandits.

Derrick Dillon, who is a 2015 graduate of Pine High School, competed at wide receiver.

This season, Dillon caught 28 passes for 386 yards (13.7 yards per reception) and four touchdowns.

“It was a great experience,” Dillon said. “I am very thankful I was able to play in the league and showcase my talents. Hopefully, it was enough for an NFL team to invite me to camp.”

Dillon said that it was fun getting back out there and playing competitive again.

“At home, you’re really just doing drills, but it’s fun to get out there, line up and go against somebody else,” Dillon said.

This was the first time Dillon has played since the 2020 season when he was with the New York Giants. He was released after the 2021 camp.

This season, the Bandits went 4-6.

“It was really good,” Dillon said. “It was a great experience of how they put the team together so quickly. I wish we could’ve won more games. We got a chance to showcase our talents. It was the first time playing ball since they played college and it was the first time for some since they got released from an NFL team, so it was all fun getting all these guys together and to go out and play for one another.”

Dillon said he got the call in February and had to report on March 22. Dillon said they did two weeks of camp and their first game was on April 17, a 17-3 victory over the Pittsburgh Maulers.

“We just had to get it together and go,” Dillon said.

This year’s regular season was played entirely in Birmingham, Ala. with the postseason being at Tom Benson Hall of Fame Stadium in Canton, Ohio.

“It was fun, but the only thing that was missing was the home atmosphere,” Dillon said. “We played all of our games in Birmingham, so the Birmingham team got all the fans.”

Dillon said that his favorite moment happened on the first day of camp.

“Nobody really knew anybody,” Dillon said. “We had just got done practicing. We went back to the hotel, somebody brought a speaker and we all started dancing and singing and we didn’t even know each other’s names.”

The USFL season comes to an end on Sunday when the Birmingham Stallions (9-1) go against the Philadelphia Stars (6-4). Kickoff is at 6:30 p.m. and the game is being televised on FOX. 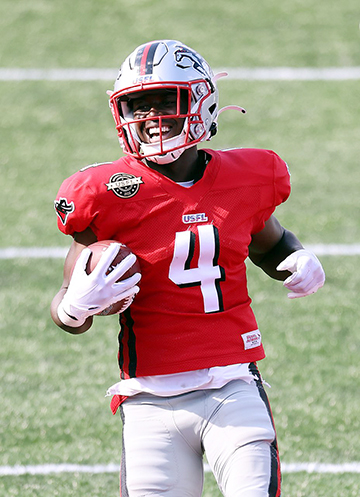 COURTESY PHOTO
Pictured is 2015 Pine graduate Derrick Dillon, who played in the USFL this season.