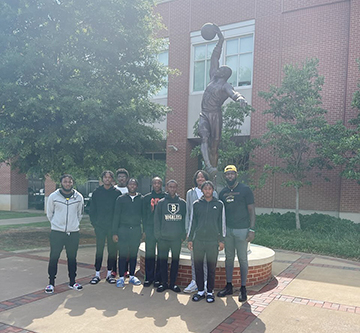 COURTESY PHOTO Bogalusa’s players are pictured in front of the Charles Barkley statue.

The Lumberjacks competed in three games and went 1-2.

“It was a great learning experience for the kids,” Williams said. “For them to see what a college campus is like from the dorm living to the athletic facilities, it was great to see them really enjoy that aspect of it! I wish I could’ve took the whole team. As for as us playing, it went well for us to only have eight players compared to other teams’ 15. I was proud of the kids, they competed and that’s all you can ask for in the summer. Our first game we came out slow, then picked it up in the second half but we already dug ourselves in a hole. But that momentum carried us into the next game which we won. Our last game, the kids were tired due to the lack of depth. But overall it was a good experience and we know what we have to work on going into this upcoming camp Friday and Saturday at Northwestern State University.”

The team also toured the arena, the football stadium and campus. The group also went bowling.