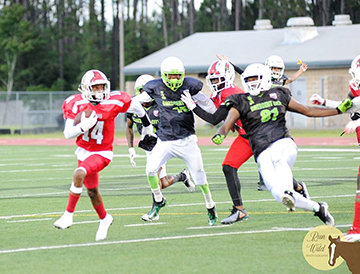 Bayou Lacombe scored often in a route of the Rampage, 40-14, last Saturday night in Mandeville to pick up the first playoff win in program history.

Crescent City received the open kickoff and it didn’t take the Rampage long to realize that the Bayou Birds were on a mission. Quarterback Craydell Vernon fumbled the snap on the game’s first play with Tre Hopkins of the Cardinals recovering at the 28-yard line.

Crescent City answered the Cardinals’ score with a score of their own on their ensuing possession. Vernon hit wide receiver Cornelius Beasle on an apparent breakdown in the Bayou Lacombe secondary for a 63-yard pass-and-catch. After a missed extra point the Cardinals led 7-6 with 7:51 left in the first quarter.

After the teams exchanged turnovers, the Birds were back in business after taking over at the 45-yard line. Epherson and Mornay finished the six-play drive with a 23-yard scoring pass and catch. Schaff added the extra point to increase the lead to 14-6 with 11:35 left in the second.

Crescent City looked to answer the score once again until Cardinals defensive back Casterdale Collier (Hammond High Magnet School) intercepted Vernon at the 31-yard line to end the threat. The score remained 14-6 at the break.

After opening second half possessions went awry, the Rampage took over in Cardinals territory at the 48. Quarterback Darryl Marchand attempted a pass that was ruled a lateral with defensive back Markus Conerly recovering at the 35-yard line. Conerly went to Franklinton High School.

The Rampage came right back on another coverage breakdown with Marchand finding WR Joseph Collins on an 83 yard touchdown pass. Marchand found WR Rhyidh Wilson to add the two-point conversion with 3:18 left in the 3rd.

On the ensuing kickoff, Conerly returned the kick 60 yards to set up Bayou Lacombe deep in Rampage territory at the 20-yard line. Epherson needed just one play to begin the Bayou Lacombe route after hitting wide receiver Arthur Ashton (Hammond High Magnet School) from 20 yards out for the score with 2:56 left in the third after a missed extra point.

With the Rampage in desperation mode, Crescent City was forced to attempt a fourth down conversion that was unsuccessful, giving the ball back to Bayou Lacombe at the 40.

Running back Jeremy Griffin (St. Helena College and Career Academy) began gashing the Rampage front, picking 35 yards on the drive that was capped off with Epherson finding wide receiver Justin Foy (Warren Easton Charter High School) wide open in the endzone for a 5 yard scoring pass. Schaff added the extra point to increase the lead 33-14 with 12:56 left in the contest.

The Cardinals final score came after taking over at the Rampage 32-yard line. Griffin capped off the three play drive when he shredded the Crescent City defense by scoring from 18 yards out. Schaff added the extra point to complete the scoring barrage 40-14.

Epherson finished the night completing 16-of-28 pass attempts for 240 yards and five touchdowns and two interceptions.

Chatman led the receiving corps with six grabs for 110 yards followed by Darrin Arline with three catches for 57 yards.

Griffin ended his night with 85 yards on 11 rushes.

Marchand and Vernon combined for nine completions on 27 attempts for 194 yards with two touchdowns and two interceptions. Running back Paul Antoine led all ball carriers with 13 yards on four attempts. Collins led all receivers with three catches for 114 yards.

Besides Conerly, Franklinton has two more former players competing for the Cardinals in Kian Conerly, Lawrence Robinson and Kobe Crain.

Bayou Lacombe will move on to the second round of the playoffs and will travel to New Orleans to play the Crescent City Kings on June 11. 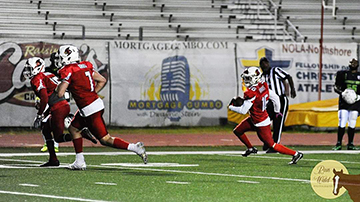 Lumberjacks All-Call Luncheon was a success