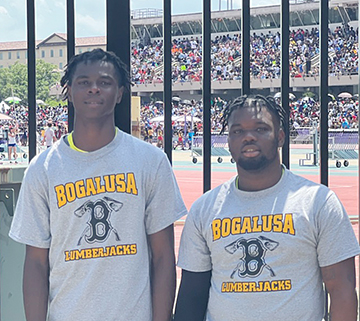 Bogalusa’s Aquinas Roberts and Haikem Thompson both came in eighth place at the Class 3A state meet that took place on May 7 at Bernie Moore Track Stadium on the campus of LSU.

Roberts was eighth in the high jump after clearing the bar at 5 feet, 10 inches. Caldwell Parish’s Jaquevius Thompson won a tiebreaker over Mansfield’s Nick Bailey with both going for 6-4.

Haikem Thompson came in eighth place in the javelin with a throw of 125-4. Berwick’s Brett Bearb won the state title at 167-0.

Roberts came in second place at both district and at regionals.

Thompson was second at district and he won the regionals.