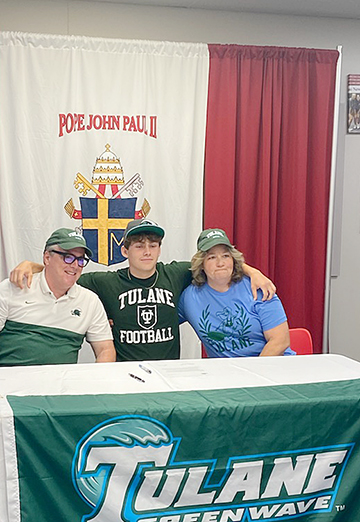 COURTESY PHOTOS Pope John Paul II’s George Arata, who is a Bogalusa resident, signed a letter of intent to attend Tulane and play football for the Green Wave. He is flanked by his parents Bill Arata (left) and Ann Arata.

Pope John Paul II’s George Arata has signed a letter of intent to attend Tulane and play football for the Green Wave.

“A few months ago, I was contacted by Florida State and ULM and where I had always wanted to go to college, and I didn’t know if it was possible, was Tulane,” Arata said. “I came into contact with the Tulane coaches, they invited me up to campus for a visit. I went there, I loved everything I saw, it’s right next to home, so that’s where I can kind of see myself. My family, a lot of my dad’s family went to Tulane and I could definitely see myself there and that’s why I wanted to be there. I also like the program they had at Tulane. I liked all of the coaches there and it just seemed like the best fit for me.”

This season, Arata, who is a Bogalusa resident, played running back for Pope John Paul II and was solid all year. This season, Arata rushed for 1,650 yards on 247 carries (6.7 yards per attempt) and 19 touchdowns.

This year, he was a first-team all-district player in 10-2A.

His other football accomplishments include team captain, team MVP, King of the Jungle and first-team all St. Tammany Farmer Team.

“George is just a great all-around guy. He is the hardest worker on the team,” Pope John Paul II coach Philip Pigott said. “Great leader. Phenomenal human being. We’re truly really going to miss him. I think he’s going to have a bright future at Tulane.”

“I think it’s his leadership and he just has a can’t be denied attitude,” Pigott said. “He’s going to make sure that whatever he needs to do to be successful, he’s going to get it done.

In soccer, Arata was a first-team all-district player, second-team all-state and academic all-state.

In the last four years, Pope John Paul II, was Division IV state runner up this season, the state champion last year and they were a quarterfinal team the two years prior.

Arata has a 4.29 grade point average. 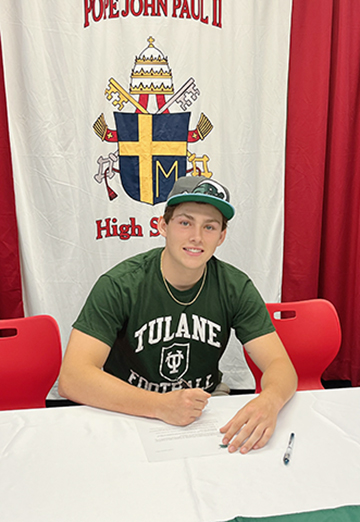