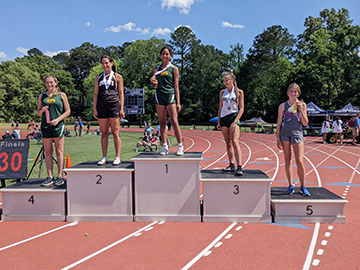 COURTESY PHOTO/Ellen Burford Bowling Green School’s Joey Dupont stands on the podium second from the right after coming in third place in the high jump at the Class 5A state meet that was held on Friday at Jackson Academy.

Bowling Green School’s Joey Dupont was third best in the state in the high jump in the Class 5A state meet that was held on Friday at Jackson Academy.

Dupont won a tiebreaker for third place in the high jump at 4 feet, 10 inches. Pillow Academy’s Alanna Hodo won in a tiebreaker at 5-0.

In the boys, Zeke Burford was seventh in the long jump with a distance of 18-6.25. Bayou Academy’s Joseph Smith won at 21-9.

To reach state, athletes had to come in the top four at district and South State.

Dupont was second at district and third in South State.

Burford came in fourth at district and he was fourth in South State.