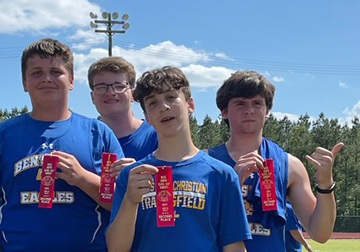 Three Ben’s Ford Christian School relay teams along with two individuals are going to state after qualifying in the 2022 Class 3A South State Meet that was held at Canton Academy.

Robichaux came in third place in the 400, clocking in at 1:05, as Wilkinson County Christian Academy’s Roderick Bailey won in 57.18.

In the field events, Matthews came in fifth place in the 100 with both running in 12.42. Claiborne Academy’s Peyton Wells won the race in 11.87.

Norwood and Robichaux were fifth and sixth in the triple jump with distances of 28 feet and 26 feet, 9 inches. Claiborne Academy’s Carter Gaston won at 38-10.

Norwood and Pajak came in fifth and sixth in the discus with throws of 83-2 and 76-4, as Claiborne Academy’s Grady Brasher had a throw of 147-9 to win.

Matthews and Talley were sixth and seventh in the long jump with distances of 16-0 and 13-5. Tallulah Academy’s Wyatt Bedgood topped the event at 18-3.25.

Wilkinson County Christian Academy won the meet with 69.5 points, as Claiborne Academy was just 4.5 points back for second with six teams posting points.

Tallulah Academy came in third at 49, followed by Prairie View Academy’s 24 and Ben’s Ford rounded out the top five with 18.5 points.