Pine’s Self is headed to regionals 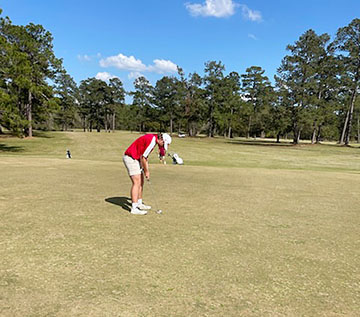 Pine’s John Eric Self prepares to hit a shot. Self is headed to regionals.

Pine’s John Eric Self is headed to the golf regionals.

Self qualified fourth after posting a 104 in Tuesday’s District 4-III tournament that was held at Riverlands Golf and Country Club in LaPlace.

The top four teams and top four golfers who were not on qualifying teams are headed to regionals.

Houma Christian School’s Ethan Keating was the top individual qualifier with an 83.

Thomas Jefferson’s Kobe Narcisse was second at 86 with FIsher’s Jace Lafort coming in third with a 94.

St. Charles Catholic won the team competition with a 326.

Team scores were computed by calculating the top four golfers’ scores from each school.

Pine scores 4 runs in the 2nd to capture…