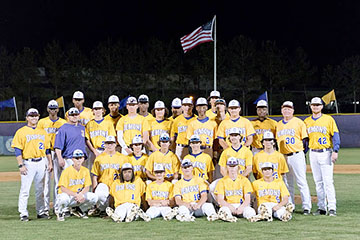 COURTESY PHOTO/Caleb Mulina Pictured are the Franklinton Demons, who are the District 9-4A champions.

Franklinton captured the District 9-4A title in baseball.

This week, Franklinton won both games against Salmen to cap off a 6-3 season in league play.

Franklinton and Lakeshore both went 6-3, but Franklinton coach Jeff Tageant said that they are the champs because they defeated Lakeshore in two of their three games against the Titans.

This is Franklinton’s second-straight district title.

On Tuesday, Franklinton won 7-0 behind another solid pitching performance from Micah Wascom.

At the plate, Wascom tripled and drove in a run.

Dillon Pace pitched the seventh and allowed no runs on a hit with a strikeout and a walk.

Tryson Fowler singled, drove in a run and scored a run.

Will Turner doubled and drove in a run.

Trevor Vise singled and had a run batted in.

Franklinton won the district title with an 8-2 victory over Salmen.

Vise went 2-for-4 with a double, three runs batted in and two runs scored.

Banyan Penton posted a hit with three RBIs and a run scored.

Kaden Buffinet singled and drove in a run.

Nathan Parden drove in a run, while D.J. Corkern and Magee both scored a run.

Turner was solid on the mound. He went six innings and allowed two runs on eight hits with six strikeouts and three walks.

Pine’s Self is headed to regionals