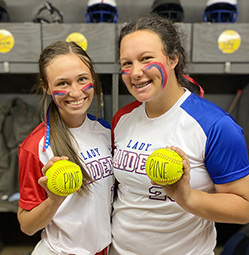 COURTESY PHOTO Pictured are Pine’s Alyssa Phelps (left) and Kirbee Magee, who both homered in Thursday’s win over Loranger.

Pine’s Lady Raiders went 1-2 in the Fontainebleau Tournament that was held March 18 and last Saturday and then 2-1 in games held Monday, Wednesday and Thursday.

The first was an 18-14 win over St. Scholastica Academy.

Kirbee Magee had three hits, including a double, with three runs batted in and two runs scored.

Bailey Brooks went 3-for-5 with a double, three runs driven in and a run scored.

Addi Nobles drove in a run.

The next game was a 16-0 loss to Northlake Christian School.

On Saturday, Pine was defeated by Springfield, 13-7.

Dunn had two hits and a run batted in.

Monday’s game was a 15-0 win over Salmen in three innings.

Addyson Phelps went 2-for-2 with two runs batted in and two runs scored.

Alyssa Phelps and Sumrall both had a hit with two RBIs and two runs scored.

Dunn singled, drove in two and scored a run.

Brooks singled and had a run batted in.

Crain scored three runs, while Katie Crain and Nobles scored a run and drove one home and Katelyn Hawkins, Ana Kate Thomas both scored a run.

On Wednesday, Pine was defeated by Pearl River, 12-1

On Thursday, Magee and Alyssa Phelps both hit a home run, helping the Lady Raiders to a 10-4 victory over Loranger.

Magee posted two hits with the other for a double with three runs batted in and two runs scored.

Dunn singled with an RBI and two runs scored.

Brooks singled, drove in a run and scored a run.

Addyson Phelps and Dillon Sumrall both singled and scored a run.

Pine’s next game will be on Monday against Varnado at home.