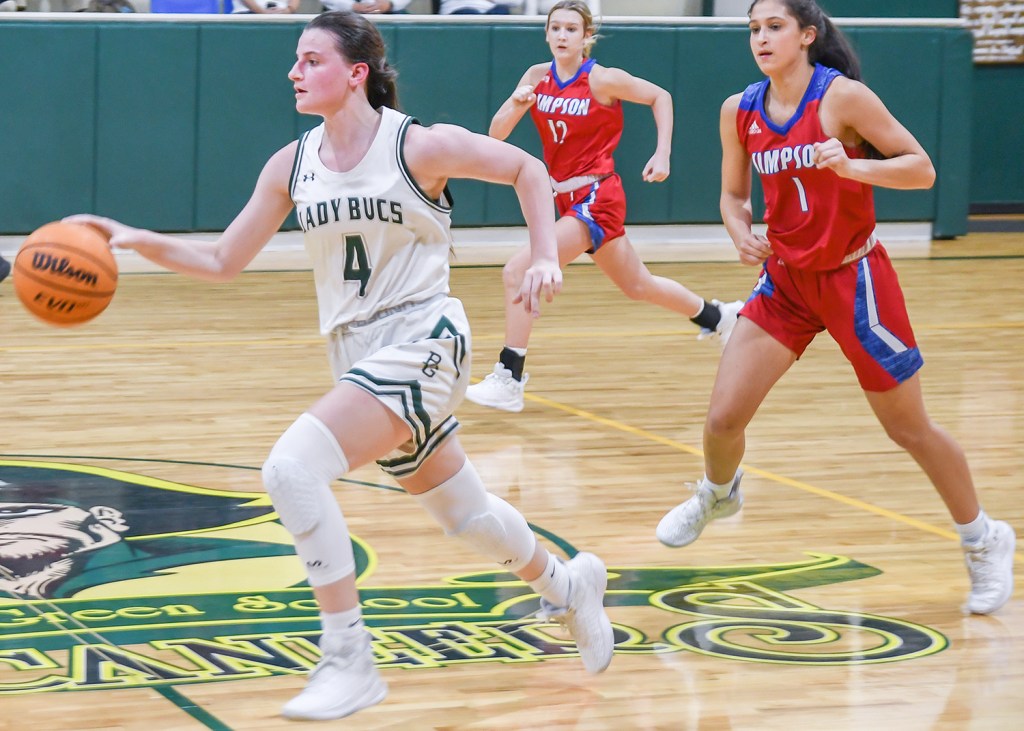 COURTESY PHOTO/Terryl Hicks Bowling Green School’s Bailey Devall dribbles the ball up the floor in a game this year. Devall and K.K. Seal are all-tournament players.

Bowling Green School’s Lady Buccaneers reached the semifinals of the Overall Tournament and came up short to the eventual champion in overtime in a 41-36 loss to Jackson Preparatory School on Monday.

Bailey Devall recorded a double-double with 12 points and 11 rebounds. Devall was good on 4-of-7 from the field and 3-of-4 in 3-pointers. Devall dished out two assists and made a steal.

Claire Wascom posted eight points, a rebound and an assist.

Bridget Devall had two points, a rebound and an assist.

Bowling Green reached the semifinals with a 64-41 victory over Regents of Oxford in the first round and a 52-42 win over Manchester Academy on Friday, Feb. 25.

Against Manchester Academy, Bailey Devall led the team in points for the semifinals with 16. She made a 3-pointer, grabbed seven rebounds and three steals.

Seal posted 10 points that included a 3-pointer with four rebounds and five steals.

Bridget Devall tallied 10 points on 5-of-9 from the field along with two boards.

Peyton Dupuy put up three points on a 3-pointer with a rebound.

Bertrand had two points, five rebounds and a steal.

Bailey Devall and Seal made the all-tournament team.

“These seniors have been part of the program for quite a while and have kept the tradition going. They’ll be sadly missed,” Bowling Green School coach Barry Seal said.

This was also the final game for coach Seal, who is stepping down as the Lady Buccaneers coach.

This was Seal’s second stint at Bowling Green.

“I would like to thank Bowling Green for the opportunity they gave me at a young age to get into coaching,” Seal said. “This has been a remarkable experience for me to help coach kids and see them develop into young women and men. The support of Bowling Green Buccaneer basketball is remarkable to any place I have ever been a part of, but there has come a time in my life where I need to be Dad and enjoy my kids and get the opportunity to watch them play one year of basketball together.”

Seal’s daughters, K.K. and McKinley, will play together at William Carey University next season. McKinley will be a senior and K.K. will be a freshman.

Bowling Green principal Phill Junkins said the school is in the process of interviewing candidates at this point and said that Seal will be a tough guy to follow.