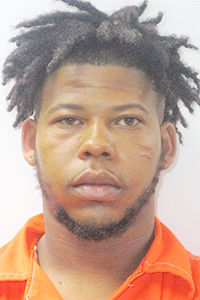 Early Thursday morning, a Washington Parish Sheriff’s Office patrol deputy stopped a vehicle inside Angie that was traveling 80 miles per hour in a 40 miles-per-hour zone, according to WPSO Chief Criminal Deputy Mike Haley.

Haley said that when the deputy approached the vehicle, he observed the driver appeared to be under the influence of some substance due to his slurred speech and inability to focus.

“After the driver exited his vehicle, he was asked if he had any weapons in the vehicle or on his person,” Haley said. “He answered ‘no’ to the question. At this time, the deputy noticed a large bulge in the driver’s pocket and removed a pistol magazine, which was fully loaded with 14 rounds of .40-caliber ammunition. At that time, the driver was detained and placed in the rear seat of the patrol vehicle.

“Returning to the vehicle, the deputy observed a pistol in in plain sight. The pistol, a .40-caliber semi-automatic pistol was retrieved along with a quantity of illegal narcotics. When the deputy provided the serial number of the pistol to dispatch, the pistol was flagged as having been stolen in Mississippi.”

The driver, Jadarius Jaronte Magee, 23, a resident of Tylertown, Miss., was arrested and transported to the Washington Parish Jail.

Magee was booked into the jail on charges of possession of a stolen firearm, possession of a controlled dangerous substance with a firearm present, possession of illegal drugs, speeding, driving under suspension and improper lane usage. His bond was set at $10,000.

“While decent law-abiding citizens are home asleep in their beds, our deputies are patrolling our highways,” Washington Parish Sheriff Randy Seal said. “One can only speculate what Magee’s intentions were during the wee hours of the morning. I certainly don’t think they were honorable. I appreciate the work of our patrol deputy in apprehending Magee and placing him in the parish jail.”