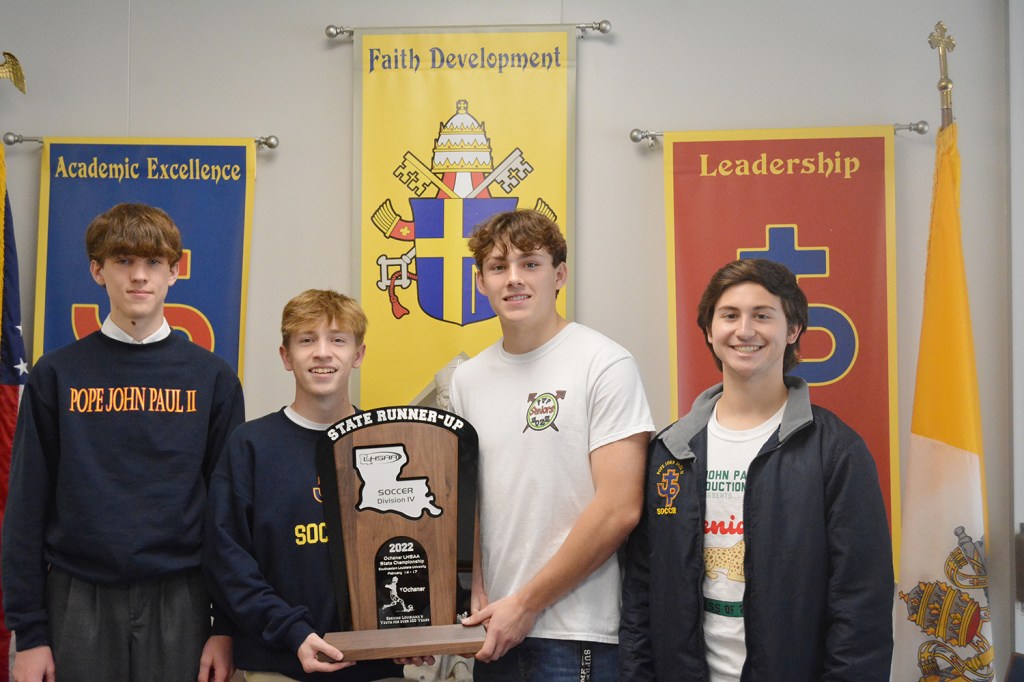 Pope John Paul II’s boys soccer team came up short in the Division IV state championship, 1-0, to 10th-seeded Isidore Newman, but despite the loss, the Jaguars posted a solid season that featured four players from Bogalusa.

Everybody except Lott are seniors. Lott is a sophomore.

“Three seniors, I think all of them are five year players,” Pope John Paul II coach Danny Clavier said. “George has the long resumé. George has started every year since eighth grade. He’s made first-team all-district a couple of times. He’s made second team all state for a couple of years. We haven’t voted on all-district or all-state yet for this year. Wilson was a key contributor this year on defense. Will’s role was attacking player. He had a key role coming off the bench and attacking. He scored his first career goal this year. He’s a really good passer and he had a lot of assists this year. Landon’s part of the future. Landon played about 50 percent of the games on defense at holding mid and he played outside mid as well. He’s got a nice transition to the attack from defending. He’s got good size. He’ll be a key starter next year.”

Besides the loss to Newman (8-8-3), Pope John Paul II’s only other loss was against third-seeded Episcopal, who went 15-5-1, in a tough schedule.

“We started off in the Champions Cup where the Division I, II, III and IV state champions get together and play a round robin,” Clavier said. “We finished in second place behind Catholic of Baton Rouge by a half a game. That was the week before Thanksgiving. We went undefeated in district play (3-0).”

Clavier spoke well about the season.

“This may be one of the most impressive soccer seasons by a Pope team in school history,” Clavier said. “The 11 seniors have left a legacy of raising the program to all-time heights. They finished with three district titles, a state championship and a runner up.”

In the title game, Newman scored in the fifth minute. Pope John Paul II had 21 shots on goal.