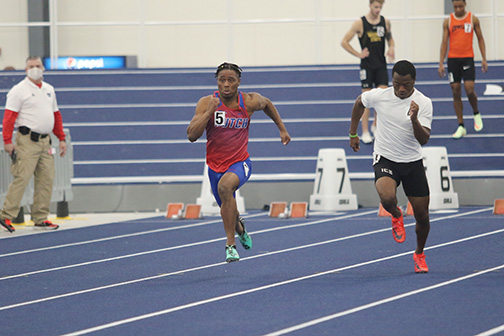 Thompson, a 2020 Bogalusa High School graduate, won his first career event in college, captured the 60-meters, qualified for nationals, ran one of the fastest times in the 60 in school history and posted his best time.

“I felt comfortable going into the race,” Thompson said. “I knew I had everything it would take to win it. I just had to go out there and do it. I thought about everyone else who is on my side, got out on the track and did what I had to do.”

Thompson, who is a second-year freshman, ran second in the prelims with a time of 6.873 seconds, coming up just short with the best time being 6.872.

In the finals, Thompson bettered his time with a 6.84 and won the event by one one-thousandth of a second for his first career collegiate victory.

“It felt like I could do more, but it felt wonderful,” Thompson said. “I don’t want this to be a one-time thing, I want to keep on doing it.”

The time was his personal best in the 60.

Thompson’s run allowed him to qualify for nationals. He needed to run 6.87 or better in order to reach nationals.

Continuing with Thompson’s time, the 6.84 time, it was the ninth best in school history.

Thompson competed in two more events, including the 200 and the long jump.