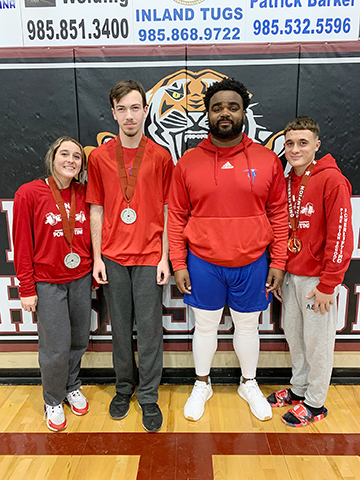 COURTESY PHOTOS Pictured are medalists from Franklinton at the Battle on the Bayou Invitational Powerlifting Meet that was held Saturday at South Terrebonne. Shown from left are Anna Arceneaux, Kole Miller, Pine coach Re’Lik Wilson and Braedan Arceneaux.

Franklinton’s Hannah Michele, Tayte Landry and Evelyn Argualles all won their weight classes and Angel Dufrene was the top lifter on the light platform and the Lady Demons came in second place for the competition in the Battle on the Bayou Invitational Powerlifting Meet on Saturday at South Terrebonne.

Franklinton teammates Ashlynn Beard and Eliza Realo were fourth and fifth in the 105.8s. Bears had a 320 total after squatting 130, benching 55 and deadlifted 135. Realo posted a 250 with an 80 squat, 50 bench and 120 deadlift. Franklinton’s Kaylee Ard squatted 160 and deadlifted 205. Ascension Catholic’s Reagan Tripode won with a 470.