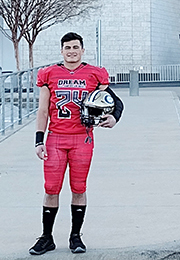 Covington linebacker Bryce Blackwell, who has ties to Bogalusa, competed in the Dream All-American Bowl at AT&T Stadium in Arlington, Texas on Monday.

Blackwell, whose father Bryon Blackwell works for Care Physical Therapy in Bogalusa, unofficially made five tackles with one for a loss and a sack in the all-star game.

Bryce Blackwell, who is a junior, had a solid season.

This year, Blackwell made 118 tackles with six for a loss, a sack, four interceptions and two fumble recoveries.

Blackwell played in the rising star game, which is for grades nine through 11.

Players came from about 38 states along with Germany and Canada.