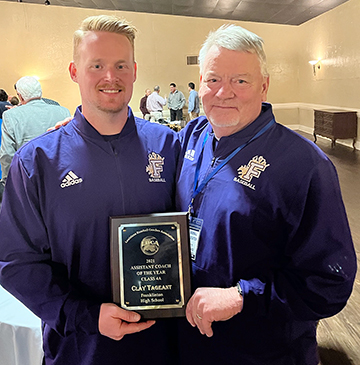 COURTESY PHOTO Franklinton pitching coach Clay Tageant (left) is pictured with his father and Franklinton head coach Jeff Tageant. Clay Tageant is the 2021 Class 4A Assistant Coach of the Year.

Franklinton pitching coach Clay Tageant has been selected the 2021 Class 4A Assistant Coach of the Year by the Louisiana Baseball Coaches Association.

Tageant received the award at the Hall of Fame Banquet on Friday in Lafayette.

“I think it’s a great accomplishment being the only assistant coach that got it,” Jeff Tageant said. “It was an award where the statistics backed it up. The pitching staff pitched great. I think our ERA was 2.22. Clay did a lot to have them prepared. It’s not just something that was done during baseball season, it was done year round. It’s a privilege to coach with your son. I’ve had the honor to coach with both of my sons (Evan Tageant and Clay Tageant) and it’s very special.”

Tageant was also named the Class 1A Coach of the Year Award in the spring 2017 when he was the head coach at Varnado.

Tageant, who is a 2011 Franklinton High School graduate, has been at Franklinton since the fall of 2017. 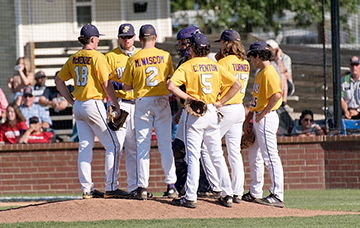