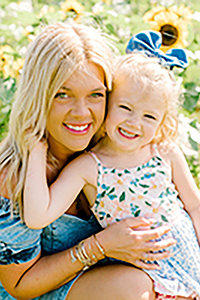 On Dec. 26, 2021, our lives changed forever as Kassi Alizabeth Creel unexpectedly departed this life. Though she has left her physical body, her smile, her spirit, and her dazzling personality will always remain with the ones who loved her.

She is survived by her sweet daughter, Elle Reese Jones. Elle was the center of Kassi’s world and Kassi spent every moment making sure that Elle had everything she needed and wanted. Kassi valued making memories with her daughter, and together they traveled this corner of the world, going to the beach, the mountains, and anywhere else Elle wanted to go. Kassi spent the last night of her life with Elle, dressed in matching pink pajamas, singing to the top of her lungs with Elle’s new microphone, decorating cookies for Santa, and making Christmas absolutely magical for her daughter.

Among her many endeavors, Kassi was the owner of Southern Sweets and was affectionately known as the “Cookie Lady.” Kassi baked her sweet treats with love, decorated them with elegance, and delivered them with care all across the parish and surrounding areas.

She is also survived by her devoted mother, Karen Borden Creel; her father, David Creel; her best friend and sister, Kailynn, and her brother-in-law, Devin Castleberry, and their children, Laurynn, Dax, and Huck; grandparents, Rita Borden and Gerald Creel; her uncle, Heath (Nancy) Borden; her aunt, Kristal (Chris) Provost; her uncle, Andy (Jenney) Creel; her cousins, Drew and Amanda Creel, Jayden, Jordan, and Kaleigh Provost, and Rhett and Isla Borden and a host of other cousins. She was preceded in death by her Poppy, the late Roy Borden.

Visitation was held at Poole-Ritchie Funeral Home from 5 p.m. until 9 p.m. on Thursday, Dec. 30, followed by a visitation on Friday morning, Dec. 31, from 9 a.m. until time for the services at 11 a.m., with interment at Pounds Pool Cemetery following the services.

When one departs this Earth, they leave a void that cannot be filled, but it is the happy times and memories that carry us through this painful storm. Thankfully, Kassi has left us with unforgettable moments that are guaranteed to bring a smile, a laugh, and probably a crazy Kassi-style dance. She will be greatly missed by her family and the entire community, but most especially by sweet Elle Reese.