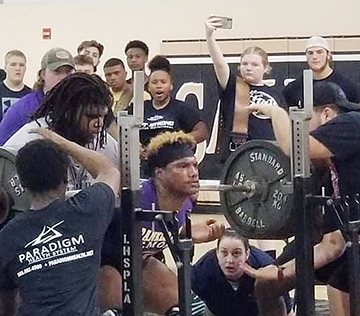 Franklinton and Pine traveled to Salmen for the boys tri meet on Saturday.

Locals took the top two spots in the 114.5-pound weight class, as Franklinton’s Ty Creel was the winner with a total of 500 punds between squat, bench and deadlift.

Pine’s Mason Gaither was second at 485.

Salmen’s Jack Robertson was second at 755 with Pine’s Samuel Thomas coming in third with a 680.

Salmen’s Caleb Johnson was second at 1,120 and Franklinton’s Ryan Barber took third after recording a 690.

Teammate Khaled Waliagha was second at 1,085 and Salmen’s Kaleb Lacoste was third with a 950.

Franklinton’s Nathan Brillinger was second with a 325.

Salmen’s Dwayne Coleman won the super heavyweights with a 1,300.

Franklinton teammates Kaden Boone and Williams Womack were second and third with a 570 and 335, respectively.

Franklinton had 52 total powerlifters at the meet, with 32 girls and 20 boys.