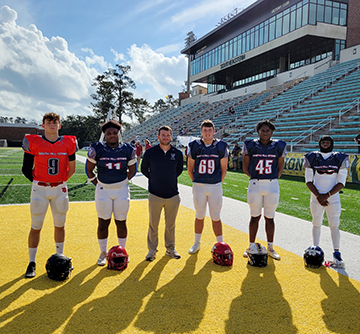 HAMMOND — Pine’s Adrianeun Johnson scored a touchdown, helping the Blue Team capture a 14-7 victory over the Red Team in the Louisiana High School Coaches Association/Louisiana Football Coaches Association North Shore All Star Game that was shortened by weather on Saturday at Strawberry Stadium on the campus of Southeastern Louisiana University.

The Red Team began the game with the ball, and five plays in, Blue Team’s Most Valuable Player Danny Sears,  from St. Paul’s School intercepted a pass and took it back to the Red Team’s 29-yard line.

Blue Team got called for holding on the first play, pushing the ball back to the 38.

On first-and-19, Johnson got the call and he delivered. Johnson took the handoff up the left sideline and into the end zone for the touchdown to make it 6-0 with 10 minutes left. Independence’s Robert Pingno made the extra point for a 7-0 lead. That was Johnson’s only rushing attempt.

A turnover on downs gave Blue possession at its own 44. Four plays into the drive, St. Helena College and Career Academy teammates hooked up on a touchdown with Corey Griffin connecting with Javon Dunn on a 26-yard pass to make it 14-0 after Pingno split the uprights on the extra point with 5:05 to go.

Red took the next drive 78 yards and scored when Mandeville’s Rex Henderson found Northshore’s Austin Jackson on a 13-yard touchdown pass. Pope John Paul II’s Shawn Riviere made the extra point for a 14-7 game with 1:56 on the clock. During the drive, Bogalusa resident George Arata, from Pope John Paul II, ran for 12 yards.

Blue punted on the next drive that ended the first quarter. Red would have started the drive around its own 15, but lightning, followed by rain, forced the game to be called after the first quarter with Blue Team winning 14-7.

Running back/safety Tamaj Hoffman, out of Slidell, was named the Red Team’s MVP.

Players in the game were seniors and were selected from several parishes including Washington, Livingston, St. Bernard, St. Helena, St. Tammany and Tangipahoa. 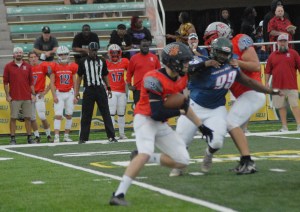 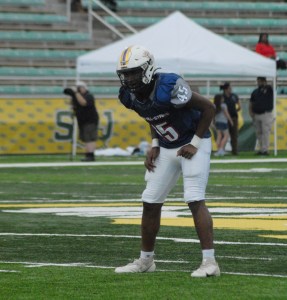 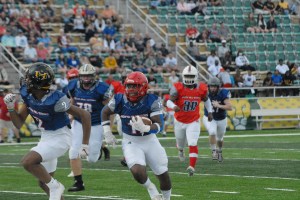 DAILY NEWS PHOTO/Chris Kinkaid
Pine’s Adrianeun Johnson rushes for a 38-yard touchdown to put the game’s first points on the board in Saturday’s all star game.