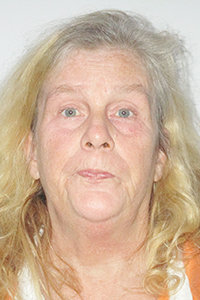 Before midnight Sunday, a Washington Parish Sheriff’s Office Sergeant responded to a report of an overturned vehicle in a ditch on Louisiana Highway 1075, according to WPSO Chief Deputy Mike Haley.

When he arrived at the scene, he encountered an obviously intoxicated and shoeless woman standing next to the overturned car, Haley said, noting that she was unsteady on her feet and had a strong odor of an alcoholic beverage. Northshore EMS responded to the scene and medically cleared Mary Angela Hunter, 52, a resident of Highway 1075.

Haley said that Hunter advised she was turning into what she thought was her driveway and instead went into the ditch, causing her vehicle to overturn and the air bags to deploy. She reportedly failed all aspects of a roadside sobriety test and was arrested and transported to the Washington Parish Jail, where her bond was set by the court magistrate at $3,500 on charges of second-offense driving while intoxicated and careless operation of a motor vehicle.

“Driving any time while under the influence of alcohol or any other intoxicant is a recipe for disaster,” Washington Parish Sheriff Randy Seal said. “I’m pleased Ms. Hunter was not injured and no innocent motorists were involved. Drunk drivers always have the potential to create serious bodily harm to others as well as themselves.”