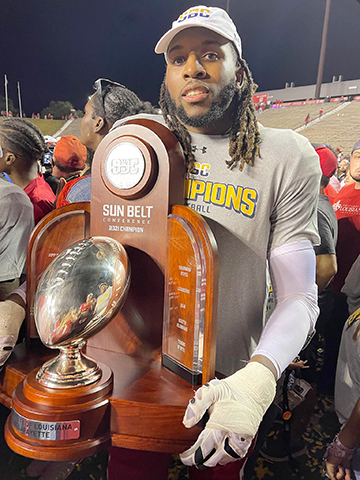 The University of Louisiana at Lafayette Ragin’ Cajuns are the Sun Belt Conference Champions after winning over Appalachian State University, 24-16, at home last Saturday.

UL redshirt junior defensive lineman Andre Jones, who is a 2017 Varnado High School graduate, made two tackles and forced an incompletion with his pressure on the quarterback on the two-point conversion attempt after Appalachian State University cut the lead to 24-16.

Jones said he took in the moment after the game.

“The confetti was coming down, the fans were on the field and I was enjoying the moment,” Jones said. “It was just a blessing to experience something like this. I didn’t want to take it for granted. I wanted to let it sink in. Only thing I could do was walk around and smile. When you’re watching it on TV and you see other teams have that moment you hope you can have that feeling one day, but when it happens to you, it’s different. You feel like you’re on top of the world. The best part is when you put the championship shirt on over your pads, you put that championship hat on and you hold that trophy.”

Jones gave credit to the fans and said it was a great experience.

“There were a lot of fans on the Cajun Walk,” Jones said. “There were ESPN cameras and reporters. It was something like you see in a movie.”

This was the second time the teams met, with the Ragin’ Cajuns winning the first meeting, 41-13.

Up next, the University of Louisiana at Lafayette will play in the R+L Carriers New Orleans Bowl in the Ceasars Superdome against Marshall University on Saturday, Dec. 18 with kickoff at 8:15 p.m.

This will be Jones’ second time playing in the Superdome and first time in the R+L Carriers New Orleans Bowl. He last played there in 2019 against Mississippi State University.

“I think it’s going to be a great experience,” Jones said. “We’re going to have a good crowd. A lot of family is going to get to come. I remember coming up in Louisiana, it was always a dream to play in the Superdome.”