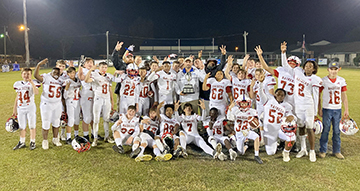 “We had a really good season,” Pine Junior High School coach Blake Dillon said. “We went 7-0 in the parish. We won our third championship in a row. We had great team leadership from our eighth-grade class. They worked as hard and bought in as much as any team that I’ve ever coached. They really love the game and all aspects of it from film to practice to showing up when it’s gametime and they are ready to play.”

In the title game, Trey Knight completed all five of his passes for 117 yards with two touchdowns and a rushing score. Defensively, Knight intercepted a pass and made three tackles.

Bryce Seigrest was the team’s leading receiver with four catches for 112 yards and two touchdowns. Seigrest also ran for 72 yards and a touchdown. Defensively, he tallied five tackles.

Kicker C.J. Cobon made all four of his extra points. Cobon also recorded a catch for five yards. Defensively, he made two stops.

Gary Brumfield picked off a pass.

Pine went 7-0 against teams in the parish and 7-1 overall. The only loss was the opener to Northlake Christian School.

This was the third time that Pine and Franklinton met. Pine won the other two games, 6-0 and 7-0.